The organiser of the #warmforwinter campaign has hung more than 40 coats from the Ha'penny Bridge in Dublin this evening, 24 hours after the city council removed other items of clothing for health and safety reasons.

Paddy Fryers, who lives in Clones, Co Monaghan, described the council's decision to remove the coats at the weekend as "bizarre" and "against the spirit of Christmas".

Mr Fryers said the "coat drop" consisted of donations from Clones and the surrounding area.

"You would swear that some of these jackets had never been worn. People have really got behind the campaign, as they see it as a way that they can help," he said.

Mr Fryers started the charitable initiative at various locations last year after he had been struck by the scale of the homeless crisis in Dublin.

The organiser of the #warmforwinter campaign in Dublin has hung more than 40 coats from the Ha'penny Bridge tonight - 24 hours after the city council removed other items of clothing for health and safety reasons. Paddy Fryers says public support for the initiative remains strong. pic.twitter.com/sZ8OxYrHZT

"I wanted to make it easy for people to get a warm coat without any stigma. They should just be able to pick one up and disappear into the darkness.

"And there had been no real issue or controversy with what I was doing. But the city council's decision to remove coats from the Ha'Penny Bridge at the weekend has made people very angry."

In a statement issued yesterday, Dublin City Council said coats would be taken down for health and safety reasons.

It also said the coats reduced the flow of traffic and caused congestion on the bridge.

Mr Fryers said he continues to be "surprised and delighted" by the public reaction to the initiative.

"The momentum behind it is unreal. Since last week I have been contacted by people from all around the world.

"They want to start similar campaigns in Belfast, Chicago, Toronto, Greece and Melbourne. It's really struck a chord. I think it shows Dublin and Dubliners in a great light. The council's reaction just doesn't make sense."

The latest government figures showed the number of homeless people in Ireland has risen to 10,514, including more than 3,800 children. 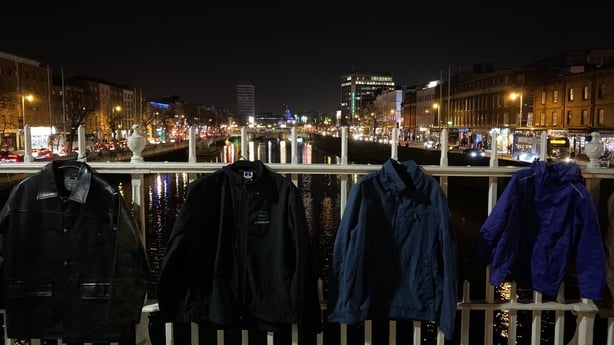