US Congressional leader Nancy Pelosi has told the "COP25" conference that the world could still count on the United States despite President Donald Trump's decision to pull out of the Paris Agreement.

Speaking in Madrid on the first day of a two-week global climate summit, Ms Pelosi said states and cities which are home to two-thirds of the US population are committed to the targets set by the 2015 agreement, as are all the Democratic candidates for president, according the US research groups.

"We're here to say to all of you, on behalf of the House of Representatives and the Congress of the United States, we're still in it, we're still in it," Ms Pelosi said to applause at a forum of heads of state from climate-vulnerable nations.

The United Nations launched the summit this morning amid growing pressure on world leaders to prove they can muster the political will to avert the most catastrophic impacts of global warming.

Leading the 15-strong Congressional delegation, Ms Pelosi came to Madrid even as her colleagues in the House consider articles of impeachment against the US President.

Mr Trump has dismissed global warming as a hoax, and dismantled many of the climate and environmental protection policies set in place by his predecessor Barack Obama.

Last month he gave formal notice of the US withdrawal from the 196-nation Paris climate treaty, which calls for capping global warming at well below 2 degrees Celsius, and 1.5 degree Celsius if possible.

The UN talks in Madrid began against a backdrop of increasingly visible impacts from rising temperatures in the past year, with wildfires raging from the Arctic and the Amazon to Australia, and tropical regions hit by devastating hurricanes.

In his opening address to the plenary of conference, the UN Secretary-General Antonio Guterres said humanity must choose between hope and surrender.

He said: "One is the path of surrender, where we have sleepwalked past the point of no return, jeapordising the health and safety of everyone on this planet.

"Do we really want to be remembered as the generation that buried its head in the sand, that fiddled while the planet burned?" 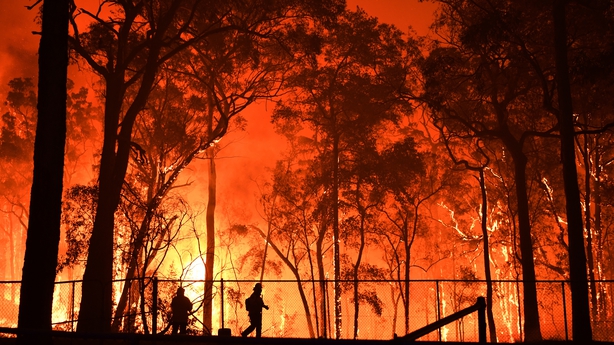 Mr Guterres cited new findings from the World Meterological Organisation (WMO) confirming that the last five years have been the hottest ever recorded.

Concentration of planet-warming CO2 in the atmosphere has also reached levels not seen in three to five million years, the WMO will report this week.

"The last time there was a comparable concentration," Mr Guterres said, "the temperature was 2 to 3 degrees Celsius warmer, and sea levels were 10 to 20 metres higher than today."

A major UN science report last year reset the Paris accord's threshold for a climate-safe world from 2 degrees Celsius to 1.5 degree Celsius, concluding that the global economy must be "carbon neutral" by 2050 to stay under that threshold.

Michal Kurtyka, Poland's climate minister who led the last round of UN climate negotiations in the Polish city of Katowice in December last year, said a surge in climate activism among young people underscored the urgency of the task.

"Maybe the world is not moving yet at the pace we would like but my hope is still particularly with the young people," Mr Kurtyka told the official opening ceremony of the talks.

"They have the courage to speak up and remind us that we inherited this planet from our parents, and we need to hand it over to the future generations," Mr Kurtyka said.

The conference aims to lay the final pieces of ground work needed to support the 2015 Paris Agreement to tackle climate change, which enters a crucial implementation phase next year.

Newly elected President of the @UN #ClimateChange Conference #COP25 in Madrid, @CarolaSchmidtZ, says that people need to be at the center of #ClimateAction. Watch live webcast >> https://t.co/wVZtMiqAWA #TimeForAction pic.twitter.com/6bKYEKN8VF

Existing pledges made under the accord fall far short of the kind of action needed to avert the most disastrous consequences of global warming in terms of sea-level rise, drought, storms and other impacts, scientists say.

The UN Secretary General has said the 'point of no return' to deal with climate change is no longer over the horizon | Read more: https://t.co/A8f86LP2Jo pic.twitter.com/aXZv0i31dO

Representing a country affected by sea-level rise, President Hilda Heine of the Marshall Islands warned that breaching the 1.5 degree Celsius barrier would spell the end of her water-bound homeland.

"The most vulnerable atoll nations like my country already face death row" due to rising seas and devastating storm surges," she said via a remote video link-up.

Governments that fail to come forward with strong carbon-cutting commitments over the next year are effectively "passing sentence on our future, forcing our country to die."

Yesterday, Mr Guterres warned that a "point-of-no-return" in the climate crisis is "in sight and hurtling towards us".

"For many decades the human species has been at war with the planet, and now the planet is fighting back," he said, decrying "utterly inadequate" efforts of the world's major economies to curb carbon pollution.