Firefighters are continuing to battle nearly 200 bushfires across eastern Australia, while authorities have issued a Code Red alert for parts of Victoria State.

Sydney has also been blanketed in hazardous smoke for the third consecutive day.

Officials imposed a total fire ban across Victoria where temperatures were expected to peak above 40C and warned people in high danger areas to be prepared to evacuate.

A Code Red alert indicates the worst possible bushfire conditions, warning people that should a fire start it will be fast moving, unpredictable and likely uncontrollable.

Dozens of fires were burning across the state by early afternoon.

Authorities warned locals in towns about 50km north of Ballarat, the state's third largest city, that it was too late for them to evacuate safely.

"You are in danger, act now to protect yourself," Victoria Country Fire Authority said in an alert. "It is too late to leave. The safest option is to take shelter indoors immediately."

It was the first Code Red alert issued by Victoria in ten years.

"Homes are not built to withstand the types of fires we may see on a Code Red day and you don't want to be caught travelling through areas on fire at the last minute if you wait and see," the Victoria Country Fire Authority (CFA) chief officer Steve Warrington told reporters in Melbourne.

Australia has been battling wildfires across several states for days, endangering thousands of people in many communities.

Blazes so far this month have killed at least four people, burnt about 2.5 million acres of farmland and bush, and destroyed more than 400 homes.

The new front of fires threatens to stretch Australian firefighters who are struggling to contain blazes after sustained drought has left bushland tinder-box dry.

In New South Wales state, firefighters were still tackling more than 60 fires. Strong winds from those fires were blowing smoke over much of Sydney, leaving the harbour city shrouded in thick smog.

State officials also imposed tough new water restrictions on Sydneysiders, to kick in from 10 December when a key dam is expected to be down to 45% capacity.

Residents will face fines if they use hoses to water their gardens and wash their cars. 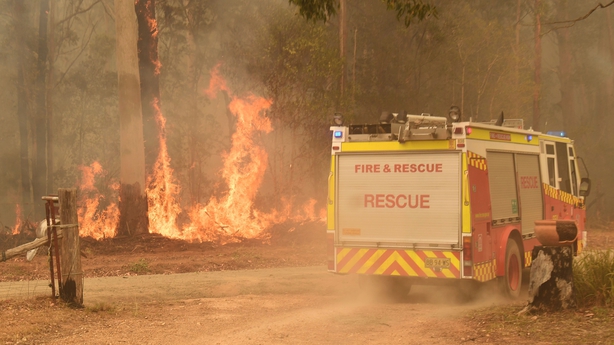 Officials told parents to keep children inside as pollution recordings showed the smoke at five times the level considered hazardous.

"It's important that if you do have children, just try and keep them indoors or discourage them from exercising too much outside."

In South Australia state, electricity has been returned to around 10,000 people whose homes were cut off the grid yesterday because of fire risks.

Lewis, a koala that was rescued from a wildfire in New South Wales, has been reunited with his rescuer ???? pic.twitter.com/kvc9RYhPGM

Authorities in that state warned fires could spark despite cooler temperatures

Firefighters have followed the crisis across four states as extreme temperatures and high winds sparked wildfires in new areas, even as they struggle contain existing fires.

The unrelenting conditions have sharpened attention on the climate change policies of Prime Minister Scott Morrison, who rejected any link.