Police and anti-government protesters have clashed again in Hong Kong.

A police officer was struck by an arrow fired by protester and an armoured vehicle set ablaze, as fires raged into the night around a campus which has turned into a base for a pro-democracy movement.

Protests have continued through the global financial hub since June with many in the city of 7.5 million people venting fury at eroding freedoms under Chinese rule.

China has repeatedly warned that it will not tolerate the dissent, and there have been concerns that Beijing could send in troops to put an end to the unrest.

Chinese President Xi Jinping this week issued his most strident comments on the crisis, saying it threatened the "one country, two systems" model under which Hong Kong has been ruled since the 1997 handover from Britain.

This evening activists dug in around Hong Kong Polytechnic University (PolyU), setting large fires to prevent police from conducting a threatened raid on the campus.

An armoured vehicle was hit by a flurry of petrol bombs as it edged towards protesters on a flyover near the campus, while a nearby footbridge was set ablaze.

Police declared the campus a "riot" scene - a rioting conviction carries up to 10 years in jail - and blocked exits threatening "new operations" against those left inside.

But protesters appeared resolute - a twist in tactics by a leaderless movement so far defined by its fluid, unpredictable nature.

Earlier, activists parried attempts by police to break through into the PolyU campus, firing rocks from a homemade catapult from the university roof.

Police shared images of an arrow embedded in the calf of an officer outside the campus and decried the use of "lethal weapons," declaring the campus a "riot scene". 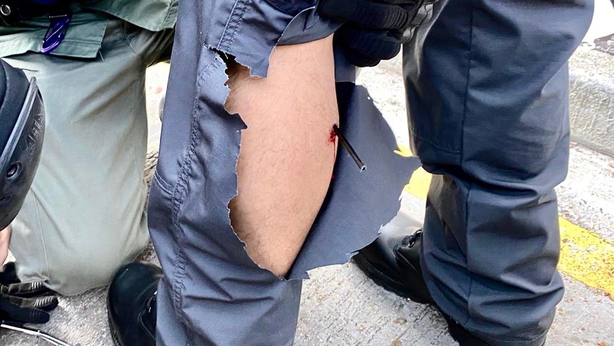 Violence has worsened in recent days with two men killed in separate incidents linked to the protests this month.

Clashes rippled out across the city deep into Sunday night, with protesters trading Molotov cocktails with tear gas fired by police.