The Environmental Protection Agency has described as unacceptable the levels of raw sewage being released into the environment on a daily basis.

A report from the EPA has found that untreated sewage from the equivalent of 77,000 people in 36 towns and villages is discharged every day.

Waste water is one of the main threats to water quality and the EPA said repeated delays in eliminating raw sewage discharges pose a risk to the environment and to public health.

According to the Urban Waste Water Treatment 2018 report, 36 towns and villages release untreated sewage every day into Ireland's coastal waters and rivers.

Half of it comes from just three areas - Arklow in Co Wicklow, Kilmore Quay, Co Wexford and Cobh, Co Cork.

The agency said the underlying problem in many cases is a lack of adequate treatment infrastructure and  said the pace at which Irish Water is fixing the problem is too slow.

The report also found waste water treatment in 21 out of the 169 large town and cities did not meet national and EU standards last year.

That was a slight improvement on 2017.

The agency also said it is not acceptable that 13 towns and villages will still have no waste water treatment. 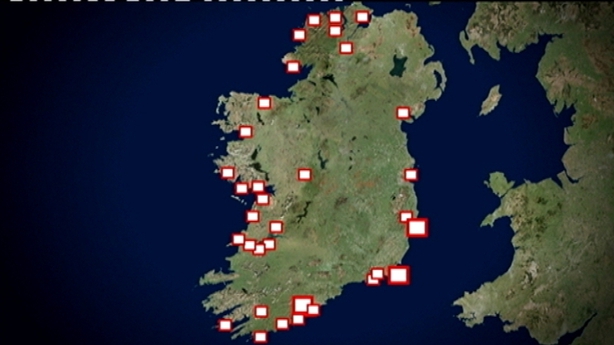 The EPA's Office of Environmental Enforcement Programme Manager, Andy Fanning, said there had been some improvements, but having raw sewage discharging into rivers and seas is not acceptable.

Speaking on RTÉ's Morning Ireland, Mr Fanning said the EPA is expecting Irish Water to deliver treatment, but slippages and delays mean that more than 13 towns and villages will still have no facilities by 2021.

Irish Water has said that "getting rid of raw sewage (being discharged into rivers and coastal waters) is a top priority."

Speaking on RTÉ's News at One, head of asset management Sean Laffey said the utility is "absolutely committed to getting it done."

Mr Laffey said that nobody in Irish Water is taking the EPA report lightly and it is absolutely correct that the agency "call us out" when expectations are not being met.

He said he admits that some projects are "not progressing as well as we'd like them to, but that is not to detract from successful work we are doing."

In relation to Kilmore Quay, where a plant was due to be built by the end of this year but has been delayed until 2022, Mr Laffey said there are "complex issues" at play in that particular case.

He said it is "critical that time is taken to ensure we get the right solution for Kilmore Quay."

The 36 towns and villages where raw sewage is released into the environment are: