For years Uluru attracted tourists from all over the world to come and climb the sacred monolith but as of today it is closed.

Hundreds of tourists flocked to Uluru for one last chance to climb the site ahead of the ban.

The ban on climbing Uluru, formerly known as Ayers Rock, came into place in line with the long-held wishes of the traditional Aboriginal owners of the land, the Anangu.

The Anangu people have called for the climb to be closed since 1985, when the park was returned to indigenous control.

The Anangu say Uluru has deep spiritual significance as a route their ancestors took.

"This is our home," read a sign at the base of the rock."Please don't climb." 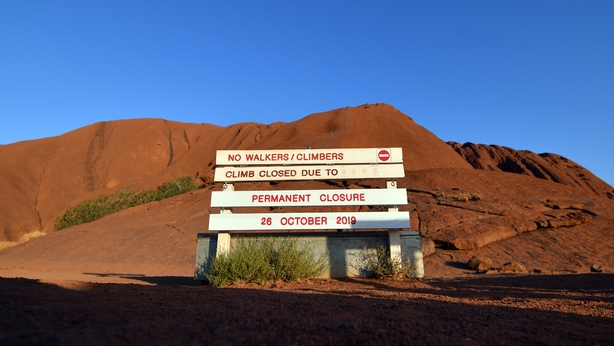 The tours that have been going on for many years now are led by members of the Anangu. However, the Anangu people have been asking for the tours to end and for the rock to be protected.

Tourists are still being encouraged to visit the Uluru-Kata Tjuta National Park where they can take in the monolith from its base, walk around its perimeter and learn about its indigenous heritage at the cultural centre.

Archaeologists believe the rock formed about 500 million years ago.

Geologist Dr Marita Bradshaw, who once worked with Geosciences Australia, studied Uluru or many years.

Dr Bradshaw believes that the climate at that time, after a series of ice ages, may have been desert climate.

The reason the rock is red is due to the oxidation of the iron-bearing minerals within the rock. Inside the mountain, the rock which has not yet been exposed to air, is grey.

The rock is also home to a vast array of wildlife with a total of 21 native mammals currently living there. Now, the animals will be able to enjoy their habitat without the disruption of humans.

It was an emotional day, said indigenous ranger Tijiangu Thomas.

"Happiness is the majority feeling, knowing that people are no longer going to be disrespecting the rock and the culture - and being safe."

With the last-ever climbers due back by sunset, rangers finally shut the entry gates to the world-famous site.