Pope Francis has canonised Britain's Cardinal John Henry Newman - who helped to found what would become University College Dublin - as well as four others this morning.

Heads of state from across the world attended the Vatican ceremony, which also raised to sainthood a Swiss laywoman, an Indian nun, an Italian nun and a nun dubbed the "Mother Teresa of Brazil".

Britain's Prince Charles, the future head of the Church of England, led the British delegation in honouring Cardinal Newman, a 19th-Century Anglican theologian who went on to become one of the Catholic Church's leading thinkers.

The ceremony was also attended by three Irish Catholic bishops and the Minister for Education, Joe McHugh.

Born in 1801, Cardinal Newman attempted to "renew" the Anglican Church, before becoming convinced that Catholicism was the only true faith and converting aged 44, rising through the hierarchy to become a cardinal.

In 1851, Cardinal Newman was invited by the then Archbishop of Armagh, Paul Cullen, to found the first Catholic university of the modern era in Ireland. He became its first rector in 1854 but resigned in 1858 amid disagreements with bishops about its future.

The college eventually became the Royal University and was run by the Jesuit Order, In 1908, it became UCD.

Despite now paying him the highest honour, the Catholic Church was accused in 2008 of defying Cardinal Newman's dying wish by trying to move his body from a small English cemetery to the grand Oratory church in Birmingham. 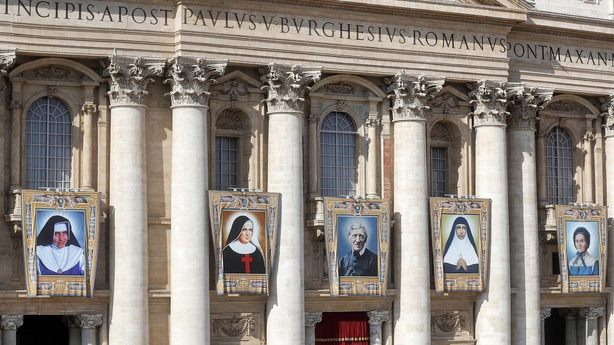 Cardinal Newman, who died in 1890, had said he wished "with all my heart" to be buried alongside lifelong friend and fellow convert Ambrose St John.

The men had lived together for 32 years.

The church's bid to separate them failed when Cardinal Newman's coffin was found empty, his body having decomposed.

Most new saints must have two "miracles" to their names, usually scientifically inexplicable healings, attributed to prayers made to the late candidate.

Cardinal Newman is credited with curing an American man from Boston with a debilitating spinal disorder, who claimed in 2001 he could suddenly walk again after praying to the British cardinal.

His second "miracle" - the inexplicable healing of a woman with a "life-threatening pregnancy" - was approved this year.