A range of goods from the EU are to be hit with new US tariffs including Irish butter, cheese, liqueurs and pork products.

The new tariffs will take effect from 18 October and are likely to hit well-known Irish brands such as Baileys and Kerrygold.

The US Trade Representative's Office released the list of hundreds of European products that will be subjected to new 25% tariffs in retaliation for EU aircraft subsidies.

The World Trade Organization authorised the US to impose duties on $7.5bn worth of European goods after it decided that the EU failed to end subsidies for Airbus.

"For years, Europe has been providing massive subsidies to Airbus that have seriously injured the US aerospace industry and our workers," US Trade Representative Robert Lighthizer said. "Finally, after 15 years of litigation, the WTO has confirmed that the United States is entitled to impose counter measures in response to the EU's illegal subsidies."

US President Donald Trump told reporters at the White House that the WTO ruling was a "big win for the United States".

The EU is pushing for tariffs of around $10 billion on American goods in a parallel process to be decided by the WTO early next year.

'No winners in a trade war'

Kerrygold owner Ornua has said that "disappointingly" it is one of many EU exporters that have become caught up in a tariff dispute that is outside of its control.

The dairy group said that any new trade tariff is an unwelcome barrier to doing business and will have a significant cost impact on its business.

Ornua also warned that if the tariff cost cannot be recovered in the market, it will negatively impact its supply chain. 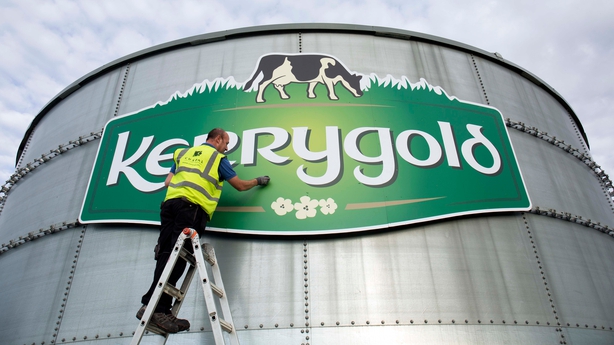 "In anticipation of the WTO's decision, we have been preparing our business by having appropriate risk mitigation measures in place," Ornua said.

"That said, we urge both parties to reconsider the impact of these tariffs and we renew calls for a settlement to be reached that does not impact on companies and brands who are not directly involved in any aspect of this dispute," it added.

Ornua is the country's biggest exporter of dairy products and reported revenues of over €2 billion for last year.

Meanwhile, the organisation representing the drinks industry here has said it is disappointed and gravely concerned by US moves to impose tariffs on a range of imports, including some Irish spirits.

Drinks Ireland Director Patricia Callan said there are no winners in a trade war.

Ms Callan called on the Government to use the upcoming budget to support the industry by reducing excise on drinks products and by providing targeted support to Irish producers.

"We are disappointed and gravely concerned that both Irish cream liqueur (from Ireland and Northern Ireland) and Irish whiskey (single malts from Northern Ireland) will be subject to tariffs in their largest market, the United States," Ms Callan said.

"We are particularly disappointed that, yet again, spirits categories have been dragged into a trade dispute about unrelated sectors, in this case aircraft," she added.

According to the organisation, 78.5 million bottles of both Irish whiskey and Irish cream liqueur were sold in the US in 2018.

"These sales help support thousands of jobs across the US and in Ireland, north and south, including in the agricultural sector which supplies Irish barley and cream for these products," Ms Callan said.

She added that the imposition of tariffs will have a highly-detrimental impact on the all-island economy and smaller craft distillers, particularly for Northern Ireland, as Brexit looms.

"The imposition of 25% tariffs on Cream Liqueurs from Ireland to the US is unwelcome and will have a negative impact to US exports in the category," the organisation said.

"However, given the strength of the brands involved and their long history of supplying the market they will continue to work with their importers and distributors to supply the US market."