New molecules, developed by researchers in University College Cork, have been shown to dramatically improve the effectiveness of existing antibiotics against several strains of infectious diseases and will help address the growing problem of antimicrobial resistance.

Many bacteria have developed resistance to current antibiotics by producing biofilms which shield the bacteria against the effects of the antibiotic.

The significant threat posed by resistant microbes to human health has been highlighted by several international bodies, including the World Health Organization.

The molecules developed by UCC interfere with the bacteria's native communication system and prevent the microbobes from producing the biofilm in the first place. In this way, the antibiotic is able to treat the infection as normal.

The addition of the new molecules made existing antibiotics 16 times more effective at treating infection. 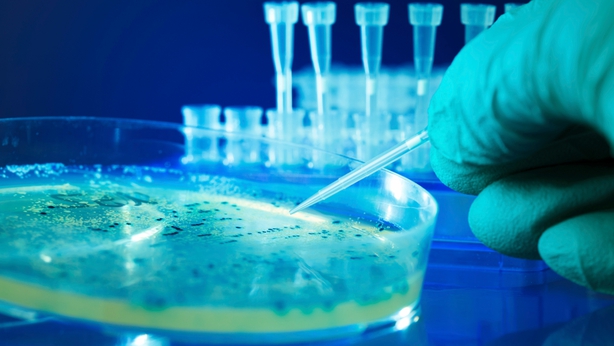 The research was spearheaded by Dr Tim O'Sullivan who is based in the Schools of Pharmacy and Chemistry at UCC.

The discovery grew out of an international collaboration with Dr Pol Huedo and microbiologists at the Autonomous University of Barcelona.

Individual bacteria often communicate with one another in a colony by producing so-called signal molecules.

Different strains use different signal molecules to communicate with each other, similar to the various languages spoken by humans.

Dr O'Sullivan said that the team had analysed the native signal molecules and then made molecular mimics which "effectively end up confusing the bacteria and prevent them from launching their standard resistance countermeasures."

"As more microbes develop resistance to current antibiotics, and relatively few new antibiotics are coming to market, we need to identify new ways of dealing with resistant infections. The approach outlined in our work has significant potential", he added.

Dr Huedo commented that the findings "validate the strategy of interfering with bacterial communication to combat difficult-to-treat infections caused by resistant organisms."

Research is currently on-going within the team on further improving their new molecules and identifying additional strains of bacteria as potential targets.

The study was published in the journal Future Medicinal Chemistry.