British Prime Minister Boris Johnson has suffered another humiliating House of Commons defeat after his second attempt for a snap general election was rejected by MPs.

Mr Johnson said he wanted to head to the polls next month to break the political deadlock, as he accused opposition parties of making "outrageous excuses" to delay.

But Labour and other opposition MPs refused to back the bid, which needed a two-thirds majority in the Commons, while the risk of a no-deal remained.

Mr Johnson said Labour leader Jeremy Corbyn had become the first leader of the opposition in the country's history to "show his confidence" in the Government "by declining the opportunity to have an election with a view to removing the Government".

But amid stormy scenes in the chamber, Mr Corbyn said he would not let his party walk into "traps laid by this prime minister". 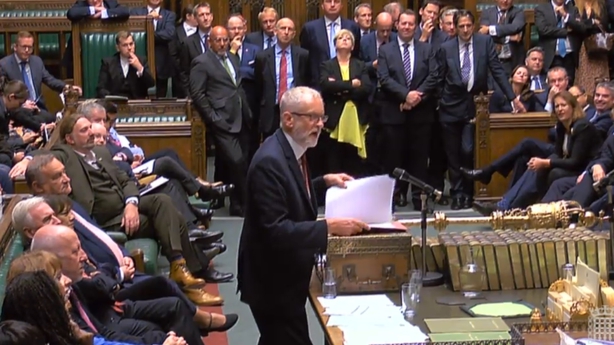 "This Government is only interested in shutting down parliament to avoid any scrutiny," the Labour leader said.

The prime minister insisted he would not ask for another Brexit delay, despite royal assent being given to legislation requiring a delay to Brexit beyond 31 October unless a divorce deal is approved or parliament agrees to leaving the EU without one by 19 October.

"It's plain from the turbulent reaction of the benches opposite that they simply want another delay and I will not have that," Mr Johnson said.

"I must warn members that their behaviour in thwarting the will of the people is undermining respect for this House in the country.

British Prime Minister @BorisJohnson accused @JeremyCorbyn of running away from his duty by refusing to back an election, while the Labour leader told the prime minister "we've had quite enough of the playground politics from the Conservative Party". | https://t.co/LsGdlfSq69 pic.twitter.com/vrCzihufIs

There were tense scenes as the House of Commons was prorogued | https://t.co/LsGdlfSq69 pic.twitter.com/EYrKBX8mqg

In a day of high drama in the Commons in which the Speaker John Bercow announced his intention to stand down next month, MPs also demanded the Government publish communications connected to prorogation and no-deal Brexit planning.

Former attorney general Dominic Grieve's demand for all written and electronic contact about the temporary suspension of parliament and Operation Yellowhammer documents since 23 July to be released was approved by 311 votes to 302, a majority of nine.

After a long, wild and historic night in Westminster, when the visions planted in many people's brains were the opposition MPs' signs of "Silenced", a tweet from one parliamentarian whose career has been changed by Brexit summed up the mood for many.

It's the end of a very long and shameful day.

Parliament is now closed and our democracy silenced for 5 weeks. #PeoplesParliament pic.twitter.com/XFPMZVqYQg

"It's the end of a very long and shameful day," wrote Luciana Berger, MP for Liverpool Wavertree.

"Parliament is now closed and our democracy silenced for 5 weeks."

Ms Berger, now a Lib Dem after defecting from the Labour Party in part because of Jeremy Corbyn's handling of Brexit, added a photo of one of the many handwritten "Silenced" signs left in the Commons, in reaction to Boris Johnson's successful move to prorogue parliament for five weeks.