Brazil's President Jair Bolsonaro signed a decree to ban burning throughout the country for two months, as the authorities scramble to defuse the Amazon fires which have triggered a global outcry.

The blazes that have engulfed large parts of the world's largest rainforest - which is crucial for maintaining a stable global climate - have also sparked a diplomatic row between Brazil and Europe that threatens to destroy a major trade deal.

The decree, which will be officially published on today, prohibits any burning for the next 60 days, barring some exceptions in cases of approved agricultural and forestry practices, media reports said.

It comes as Mr Bolsonaro's renewed demand that French President Emmanuel Macron withdraw "insults" against him cast doubt on whether Brazil would accept the G7's offer of $20 million to help combat the fires.

Mr Bolsonaro initially rejected the G7's offer, saying on Tuesday that he would be willing to accept it only if Macron withdrew his "insults," before appearing to change his mind to say Brazil would accept foreign aid on the condition that it controlled the money.

But later on lat night, the South American leader again called for Mr Macron to apologise.

"Only after he withdraws what he said ... we can talk again," Mr Bolsonaro told reporters yesterday, referring to President Macron.

Mr Macron has accused Mr Bolsonaro of lying to him about his commitments on climate change and vowed to block the EU-Mercosur trade deal involving Brazil that took decades to negotiate. 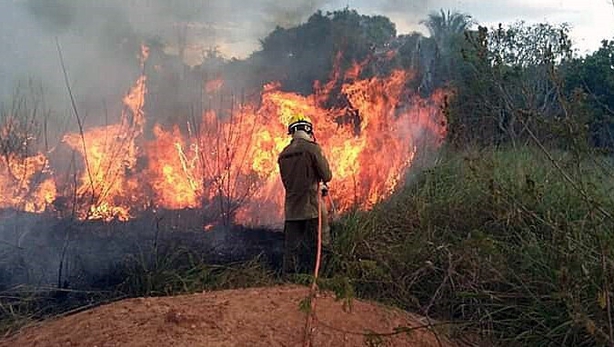 Fires are also ravaging neighboring Bolivia where President Evo Morales and his rival in upcoming elections have suspended campaigning to deal with the blazes.

Mr Bolsonaro yesterday supported Peru and Colombia's proposal for an emergency Amazon summit next month so regional countries could coordinate a strategy to protect the vast rainforest.

The latest official figures show 1,044 new fires were started Monday and Tuesday, taking the total this year to 83,329 - the highest since 2010 - even as military aircraft and troops help battle the blazes.