A protest by beef farmers at Liffey Meats in Ballinasloe, Co Galway is continuing despite the issuing of a High Court injunction.

A total of five meat processors have now been granted injunctions against the blockades, which are taking place across the country.

The owner of three beef processing plants has secured a temporary High Court injunction restraining protesters from blockading its factories and from intimidating their staff and suppliers.

The order was granted in favour of Liffey Meats, which owns and operates plants outside Ballinasloe in Co Roscommon, Ballyjamesduff in Co Cavan and Hackettstown in Co Carlow.

At today's vacation sitting of the High Court, Mr Justice David Barniville was told that the slaughtering of animals at the plants had ceased due to protestors blocking the entrances.

As no livestock was getting through the jobs of the firm's 600-strong workforce had been put at risk, the company's counsel Rory Mulcahy SC told the court.

Counsel said that the blockades of his client's three facilities commenced on Tuesday.

As a result, no lorries carrying livestock could currently enter any of the three plants in question.

In addition to protesters physically standing in front of the entrances, bales of hay and silage had been used to prevent vehicles from entering the plants.

Mr Mulcahy said some of his client's staff and persons attempting to make deliveries to one of the plants had been intimidated by the protestors and there had been some altercations.

Liffey Meats client had no problem with any peaceful protest.

However the company had no choice other than to seek an injunction because the blockade was an unlawful activity which was damaging his client's business.

Counsel said that the injunction proceedings had been brought against 14 individuals his client had been able to identify and that further proceedings were likely to be brought when others involved in the blockade had been identified.

After considering submissions by the company Mr Justice Barniville said he was satisfied on an ex-parte basis to grant the injunctions restraining the protesters from blocking the entrances to the three plants.

The judge further restrained the protesters from trespassing on the company's properties or from intimidating any of the Liffey Meat's staff or visitors to the plants.

Judge Barniville, noting that the blockades came after talks earlier this month between farmers representative groups and the owners of the processing plants failed to bring about an agreed resolution, said it would be much better to enter into discussions than engage in the acts as alleged.

The Judge adjourned Liffey Meats proceedings to next Tuesday's sitting of the High Court.

Liffey Meats is the fifth beef processing plant owner to obtain a High Court injunction against protestors who earlier this week commenced the blockade of their processor's facilities.

Since Tuesday Dawn Meats, ABP, Kepak and Slaney meats have obtained similar orders from the courts. In addition, Dawn Meats have obtained permission to bring proceedings seeking the attachment and possible committal to prison of one individual it claims has breached the injunction and is allegedly in contempt of court.

The actions brought by Dawn Meats and ABP return before the High Court on Friday morning.

Two of the ongoing pickets were temporarily stood down today to allow Chinese inspectors visit facilities in counties Tipperary and Kilkenny.

Farmers have been protesting at ABP in Cahir since Sunday, but this afternoon they left the gate before Chinese inspectors arrived at the facility.

In Co Kilkenny, dozens of people have blockaded the Dawn Meats facility at Grannagh since the weekend, but it has been confirmed that they will withdraw entirely from the site when inspectors visit there tomorrow morning.

Organisers have said the protest will continue until tomorrow and will resume as soon as the delegation leaves.

It is understood that preparations are under way for protesters to meet management from the plant with a view to ending the protest on a more permanent basis.

Pickets are continuing at several other locations, despite several High Court injunctions against them. 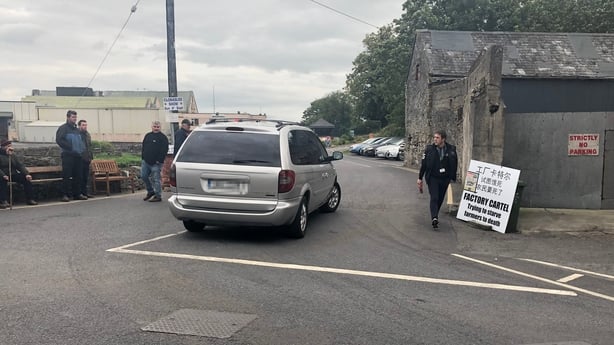 In Rathdowney, Co Laois, there was a presence at the gates of Meadow Meats as the visiting inspectors arrived, with signs written in Chinese setting out the protesters' issues.

Farmers are defiant in the face of possible arrest if the meat processors seek to have the injunctions enforced when the case comes before the High Court again tomorrow.