The Tánaiste Simon Coveney has said the Irish backstop is the insurance policy which is needed to protect the peace process from Brexit.

He made the comment following the leaking of a UK cabinet paper which concluded a hard border cannot be avoided if the UK leaves the EU without a deal.

The documents, published by the Sunday Times, warn that the UK will be hit with a three-month "meltdown" at ports, a hard border and shortages of food and medicine if it leaves the EU without a deal.

In a tweet, Tánaiste Simon Coveney said Ireland has always been clear that border infrastructure must be avoided and the backstop is the insurance policy to protect the peace process.

According to Irish Government sources: "There is a deal on the table which will avoid a hard border - these papers yet again underline the need for a managed Brexit, including the backstop insurance policy as set out in the Withdrawal Agreement.

"It is stated policy of the EU that in the case of no deal, peace and security on the Irish border is key.

"Our teams are working with the European Commission on the twin objective of avoiding checks at the border and maintaining Ireland's place in our EU single market.

"However any solution that is found will be far inferior to the backstop and the all-island economy is going to be badly hit.

"It is also worth noting that once again voters in Northern Ireland are showing that they overwhelmingly support the backstop."

Fianna Fáil's spokesperson on Brexit, Lisa Chambers, said the leaked document "merely backs up all of the warnings that Ireland has been outlining about the fallout from a no-deal Brexit.

"Most serious of these is the possibility of a return of a border on the island of Ireland, something which cannot and should not be countenanced.

"Let me be clear, a no-deal Brexit would be catastrophic for the island of Ireland. This document catalogues a sector by sector impact on the UK, but there will also huge implications for these areas in Ireland."

However the DUP leader Arlene Foster told RTÉ News that she has been told by British government officials that the document codenamed Operation Yellowhammer is out of date and was leaked to Sunday Times by people trying to undermine British Prime Minister Boris Johnston. 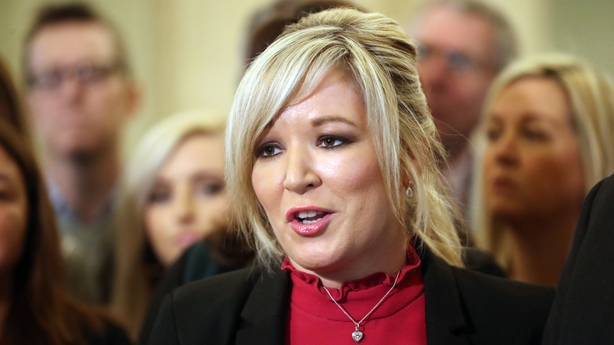 Responding to the report, Sinn Féin's deputy leader Michelle O'Neill said Ireland as a whole had been voicing these concerns for months.

Ms O'Neill added: "These reports are no surprise to those of us on this side of the Irish Sea who have been voicing our very real concerns on the consequences of a no-deal Brexit for a considerable period of time directly with the British government and the European Commission."

"The island of Ireland faces its biggest and most profound challenges in a generation as the threat of a no-deal Brexit becomes a growing reality in the immediate time ahead."

"Boris Johnson and his plans for a no-deal Brexit on 31 October are a threat to stability and prosperity on this island," he said.

"Following our meeting earlier this month, SDLP concerns that Johnson does not fully understand the complexities and fragilities of relationships in Ireland were confirmed.

"The details in this leaked document now confirm that he doesn't care either.

"We know that a no-deal Brexit will result in food and medicine shortages. Now, by the British government's own admission, we know that trade across the border will grind to a halt."

Labour leader Brendan Howlin said: "This confirms our worst fears for the impact of a no-deal Brexit and shows the recklessness of the current strategy being pursued by the British government that will put a hard border on our island.

"There is an urgent need for an alternative path to come from the House of Commons."

Mr Howlin backed British Labour Party leader Jeremy Corbyn's plan to head a caretaker government, which would extend Article 50 and then call a general election, as the " most realistic means of avoiding the chaos that is outlined today".