Portugal's government has declared an energy crisis following significant fuel shortages caused by a tanker drivers' strike. Motorists have been filling up in the run-up to the strike causing some 15% of the country's service stations to run completely dry.

Prime Minister Antonio Costa - who had warned that the government would not hesitate to require striking drivers to work if the situation demanded - said that "the minimum service is being respected and for now everything is going with civic-mindedness and calm".

His government has declared an "energy crisis" which allows it to ration fuel - 25 litres for car owners and 100 litres for trucks.

It has also decreed that tanker drivers will have to deliver a minimum of 50% of their normal shipments. 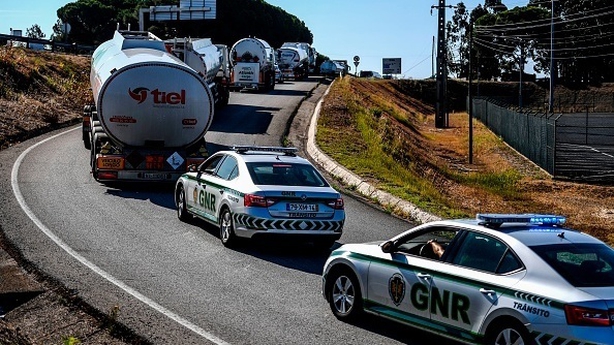 This morning Portuguese police escorted fuel trucks to supply petrol stations on the first day of a tanker drivers' strike threatening supplies at the height of the summer holidays.

A convoy left a major fuel depot in Aveiras, a Lisbon suburb, crossing a picket line of about 30 striking drivers without trouble, according to reports.

Driver unions said the transport companies had "bought off" some drivers even though the government has laid down rules requiring minimum deliveries for emergency services and other priority customers.

In the run-up to the strike last week, motorists had been filling up and by this morning, some 15% of the country's 3,000 service stations were completely out of fuel and another 15% were short of at least one grade.

Airports are another priority for fuel deliveries, and around 500 soldiers and paramilitary police could be called upon to drive tanker trucks if the minimum level of deliveries is not adhered to.

Tanker drivers staged a four-day strike in April but called it off when they won a wage increase.