A miniature pony has been rescued after it was found tied up on the side of the road in Cork city covered in dog bites and with some of its flesh rotting.

A member of the public called an animal rescue charity after spotting the badly injured pony yesterday.

Speaking on RTÉ's News at One, Kelly Mellerick, who is a volunteer with My Lovely Horse, said when they found the pony, he was "shook" and it was obvious he was in severe pain.

After being checked by a vet from the Department of Agriculture, the pony was released into the care of the charity. 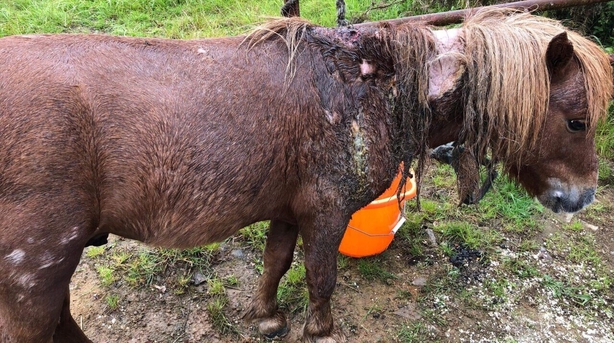 Ms Mellerick said that when the pony arrived at their farm in Cobh, Co Cork, volunteers were shocked at his condition.

She said the pony must have suffered a long period of abuse as some of his wounds were old and had "closed over".

Ms Mellerick said the pony, who has been named 'Mikey', is doing "very well" since arriving at the farm and the charity is hopeful he will make a full recovery, but said he had a long way to go.