The freak storm only lasted about 20 minutes, according to witnesses interviewed by state television ERT.

"It was an unprecedented phenomenon," said Charalambos Steriadis, head of civil protection in northern Greece.

"Six tourists were killed and at least 30 people were injured during this cyclone," Mr Steriadis said.

Officials have declared a state of emergency. 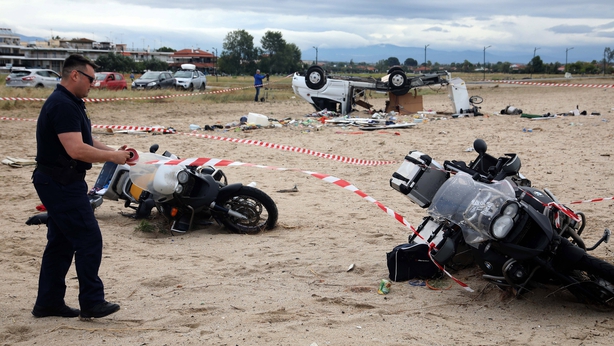 The storm overturned and ripped open a caravan occupied by a Czech family on a local beach, killing an elderly couple and injuring their son and grandson.

Elsewhere in the region, a Russian man and his son were killed by a falling tree.

A woman from Romania and her child died when the roof of a tavern caved in, police said, while dozens of people were dining.

"I want to express my sorrow on behalf of all... We mourn for the loss of these souls," said Citizen Protection Minister Michalis Chrisochoidis, who is overseeing operations in the area.

"We are in solidarity with their relatives, with the people who have lost their families," he added.

According to port police, a fisherman in his 60s was also missing.

The freak weather also knocked out power in the area, with army crews working to restore services.

At least 140 rescue workers were involved in the operation.

Prime Minister Kyriakos Mitsotakis, who took over on Sunday after general elections, cancelled his meetings to address the disaster, his office said.

The storms came after temperatures in Greece soared to 37C over the past two days.