US President Donald Trump has abruptly announced the cancellation of sanctions imposed by his own Treasury Department to tighten international pressure on North Korea.

"It was announced today by the US Treasury that additional large scale sanctions would be added to those already existing sanctions on North Korea. I have today ordered the withdrawal of those additional Sanctions!" Mr Trump said in a tweet.

But The Washington Post reported, citing Trump administration officials, that the president's tweet referenced future sanctions that had not been announced and were scheduled for "the coming days."

It was announced today by the U.S. Treasury that additional large scale Sanctions would be added to those already existing Sanctions on North Korea. I have today ordered the withdrawal of those additional Sanctions!

The Thursday sanctions were the first new sign of pressure since talks between Mr Trump and North Korean leader Kim Jong-un broke down in Hanoi less than a month ago.

However, Mr Trump, who has previously spoken of "love" for the totalitarian leader, appears to retain hope that his strong personal relationship will bear fruit.

"President Trump likes Chairman Kim and he doesn't think these sanctions will be necessary," the president's spokeswoman, Sarah Sanders, said.

Adam Schiff, a Democrat who heads the intelligence committee in the House of Representatives, blasted Mr Trump for cancelling sanctions "imposed only yesterday and championed by his own national security advisor, because he ‘loves' Kim."

"Foolish naivete is dangerous enough. Gross incompetence and disarray in the White House make it even worse," Mr Schiff tweeted. 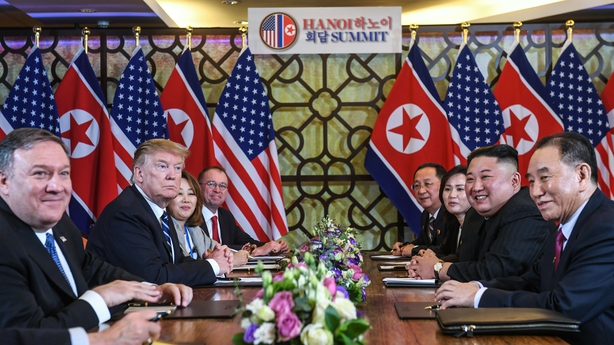 On Thursday, Trump national security advisor John Bolton had tweeted that the sanctions were meant to put an end to "illicit shipping practices" by North Korea.

"Everyone should take notice and review their own activities to ensure they are not involved in North Korea's sanctions evasion," he said.

China complained, saying that it did enforce all UN resolutions and opposed "any country imposing unilateral sanctions and taking long-arm jurisdiction against any Chinese entity according to their own domestic laws."

On Thursday, he sent a tweet reversing decades of US policy and pledged to recognize Israeli sovereignty over the hotly contested Golan Heights border area with Syria.