A memorial stone marking the site of Strasbourg's Old Synagogue, which was destroyed by the Nazis in World War II, was vandalised overnight, officials have said.

"Once again, enough is enough," Mayor Roland Ries wrote on his Facebook page before heading to the site for an inspection.

"The site is itself a response to whoever did this repulsive act because it symbolises both the exactions and horrors of the Nazi regime and the French people's power of resistance," he added.

The stone lies next to the Avenue of the Righteous, dedicated to non-Jews who risked their lives to save Jews during the Holocaust, Mr Ries noted.

"A new incident of anti-Semitism in our town," deputy mayor Alain Fontanel added on Twitter, posting a picture of a large black marble slab that had been knocked off its plinth.

"Quai Kleber synagogue was burnt down by the Nazis nearly 80 years ago. The memorial stone which marked this tragedy was vandalised overnight." 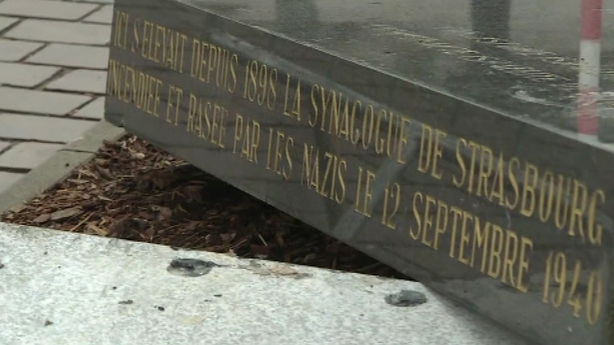 The town hall was working with the police to track down those responsible, Mr Fontanel said.

The synagogue, which was the Jewish community's main place of worship in the city, was ransacked and burnt to the ground by Hitler Youth on 30 September 1940.

The region was already shaken on 19 February when 96 graves were daubed with swastikas at a Jewish cemetery in Quatzenheim, northwest of Strasbourg.

"There is no doubt this was an intentional act," Thierry Roos, spokesman for the Israelite Consistory of the Lower Rhine region, was quoted as saying by local newspaper Dernieres Nouvelles d'Alsace.

"They wanted to erase the memory of the synagogue on quai Kleber by destroying it twice," Mr Roos said.

A statement issued by the regional prefecture said that "anti-Semitism strikes at values of the Republic shared by all French citizens. No display of intolerance must threaten our ability to live together."