Two Northern Ireland-registered fishing vessels were detained in Dundalk Bay on Tuesday evening of this week.

They were detained by the crew of the LÉ Orla who were carrying out their normal patrols in the area.

The Irish Naval Service has confirmed the two boats were detained for alleged breach of fishing regulations.

They were escorted to Clogherhead where they were handed over to gardaí yesterday.

Gardaí say the vessels, The Boy Joseph and The Amity, were detained under the 2006 Fisheries Act and an order to hold the boats for 48 hours was issued at Dundalk District Court.

The fishing boats remain at Clogherhead. 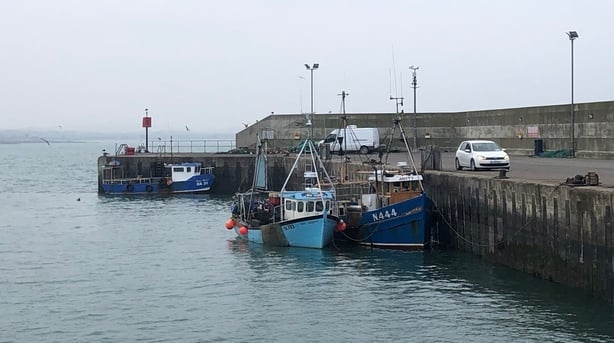 The detention of the two vessels comes amid an ongoing dispute caused by the demise of an informal deal between the UK and Irish governments.

The Voisinage agreement, which collapsed months after the Brexit referendum, was a reciprocal understanding between the UK and the Republic dating back to the mid-1960s that allowed vessels from Northern Ireland to fish in Irish inshore waters (zero to six nautical miles from shore) and vice versa.

But the agreement hit the rocks in late 2016 when a number of Irish fishermen brought a case to the state's Supreme Court, challenging the right of Northern Ireland vessels to fish in their waters.

The court ruled Voisinage was an informal agreement of insufficient legal standing to formally grant access to foreign registered boats.

That decision effectively banned Northern Ireland boats from fishing in Irish inshore waters - a move that impacted fishermen north of the border who traded in species such as lobsters, crabs, mussels and whelks.

The UK has continued to recognise the Voisinage agreement so Irish vessels remain free to fish inshore waters around Northern Ireland.

After the Supreme Court decision, the Dublin government pledged to introduce legislation to give legal effect to Voisinage.

But two years on, the law change has not yet materialised, with many politicians south of the border opposed to draft proposals forwarded by the Government.

Fishermen in Northern Ireland have accused the Irish authorities of stalling, claiming the issue has become caught up in Brexit and is potentially being used as a bargaining chip for future negotiations on how Irish vessels would access UK waters once it leaves the EU.

A spokesman for the Department of Agriculture, Food and the Marine in Dublin highlighted that an independent body - the Sea-Fisheries Protection Authority (SFPA) - enforces sea fisheries law in Ireland.

The spokesman said it was important to note that the Supreme Court had ruled the Voisinage arrangements were not invalid, only that there is currently insufficient provision for them in domestic Irish law.

In a statement the Minister for Agriculture, Michael Creed said the Government "stands ready to progress the legislation as a matter of urgency."

It added: "It is important to note that the Supreme Court upheld the High Court finding that the Voisinage arrangements are not invalid but that, as it stands, there is insufficient provision for them in domestic law. The Supreme Court in fact noted that the arrangements were a sensible recognition at official level of practice and tradition, where fishing boats traditionally fished neighbouring waters."

The deputy leader of the DUP has called on the Taoiseach to explain why the two trawlers were impounded.

Nigel Dodds said he has raised the "heavy handed tactics" with the British government.

"Whilst Northern Ireland allows Irish boats to fish in our waters, the Republic of Ireland has policed a hard border and do not allow Northern Ireland boats enter their waters," said Mr Dodds.

"This is quite outrageous."

The politician added: "Despite the Voisinage Agreement to have reciprocal fishing arrangements, the Irish have never enacted any legislation to give legal effect to the agreement. Legislation was drafted in 2016 but remains on the shelf.

"We have raised this with the Irish government previously. If they have been holding back as some bargaining chip on Brexit then it utterly exposes the Irish faux concern about a hard border on the island of Ireland," he said.

Mr Dodds continued: "These heavy handed tactics with our fishing vessels demonstrate that Leo Varadkar and Simon Coveney are entirely focused on Ireland and are fair weather friends to Northern Ireland. When Leo Varadkar talked about soldiers on the border he didn't mention the Irish sending warships with 76mm guns."

Jim Allister, leader of the Traditional Unionist Voice party, said it was time to "stand up for Northern Ireland's fishermen".

He said: "The reciprocal basis of the Voisinage agreement has been breached, so why are we still pretending it exists and operating it to the disadvantage of local fishermen?"

He called on the authorities to ban Irish boats from Northern Ireland waters, adding: "Doing nothing is no longer an option."