Emily and Jack were the most popular baby names in 2018, according to figures released by the CSO, which has also included names with fadas in them for the first time.

James was the second most popular name for a boy, the same position it held last year, while Grace moves into second place from third overtaking Emma.

Noah, Conor and Daniel appear in the top five for boys, with Sophie and Amelia rounding out the top five girls' names.

Appearing for the first time in the top 100 boys' names are Frankie, Freddie and Theodore with Ada, Bella, Bonnie and Ivy on the girls' list.

Theodore and Ada also grew most in popularity moving 63 and 67 places respectively.

For the first time, the CSO has included names with fadas on the list.

Seán is most popular boys name coming in at 13 on the overall list, followed by Oisín at number 15, while for the girls, Róisín appears at 38 and Éabha at 48.

Conradh na Gaeilge, which has campaigned for the change, welcomed the development.

Spokesperson Julian de Spáinn said it was a significant step for the CSO and it is very important at the most basic level that names are spelled correctly, saying it was important for self-identity and hoped other government agencies and private bodies follow suit.

The CSO list also highlighted regional differences with Michael the most popular name in Galway city but only eight on the list overall.

Sligo also went against the national trend with Leah being the most popular in the county, but only 36 on the national list. 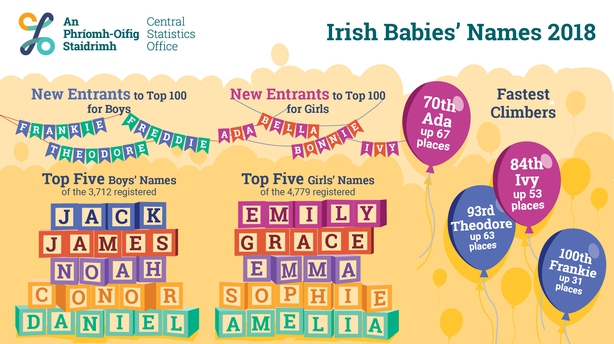