The sailor pictured kissing a woman in Times Square as people celebrated the end of World War II has died aged 95.

George Mendonsa had a seizure on Sunday after falling at an assisted living facility in Middleton, Rhode Island, his daughter Sharon Molleur said.

In the famous image, one of four taken by Alfred Eisenstadt for Life magazine, Mr Mendonsa is seen ecstatically bending over and kissing a woman in a white nurse's uniform.

The picture was published by Life as "V-J Day in Times Square."

Mr Mendonsa, who served in the Pacific during World War II, was on home leave when the picture was taken.

He had long claimed to be the sailor in the picture, but it wasn't confirmed until recently with the use of facial recognition technology. 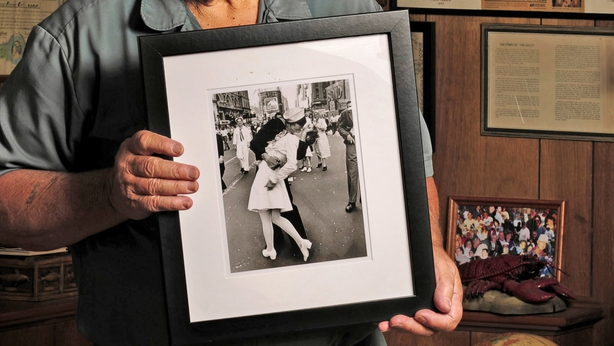 Mr Eisenstadt did not get the names of the kissing strangers.

He later described watching the sailor running along the street, and grabbing any girl in sight.

"I was running ahead of him with my Leica looking back over my shoulder but none of the pictures that were possible pleased me," he wrote in "Eisenstadt on Eisenstadt."

"Then suddenly, in a flash, I saw something white being grabbed. I turned around and clicked the moment the sailor kissed the nurse. If she had been dressed in a dark dress I would never have taken the picture."

Mr Mendonsa, who served in the Pacific during World War II, was on home leave when the picture was taken.