The centenary of the first Dáil was commemorated today with a joint sitting of the current Dáil and Seanad in the round room of the Mansion House in Dublin where the first Dáil met 100 years ago today.

The historic event took place a few weeks after the tumultuous elections of 1918, which saw the victorious Sinn Féin candidates reject the Westminster parliament and declare independence.

President Michael D Higgins delivered the keynote address to the assembled dignitaries in the Round Room.

He said that those who gathered 100 years ago were the first representatives of the nation to derive their authority directly from the people.

The President called on those gathered to reflect on the ambition of the first Dáil.

He said the fate of the Irish revolution now lies in the hands of the current generation of Irishwomen and Irishmen.

When the first Dáil sat in January 1919, it conducted its business mainly through the Irish language, so President Higgins made a point to speak through Irish and English in his address.

His speech was followed by re-enactments from the formation of the first Dáil, involving some relatives of those present on the day.

Mr Higgins and his wife Sabina will host a reception for international speakers and members of parliament in Áras an Uachtaráin this evening. 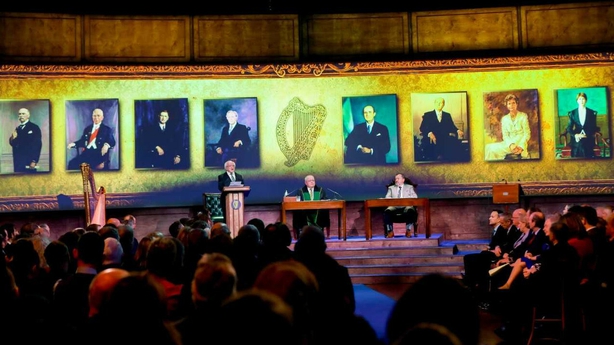 There were also speeches by Taoiseach Leo Varadkar and the leaders of the other political parties.

Mr Varadkar described today's event as an opportunity to recall the past and look to the future.

He said: "The meeting of the First Dáil was a bold exercise in democracy, an assertion that the struggle for Irish independence had the support of the Irish people, and derived its legitimacy from them."

Fianna Fáil Leader Micheál Martin described the First Dáil as the "assembly of a rising people", determined not only to achieve freedom, but also to use that freedom to create new possibilities.

Sinn Féin leader Mary Lou McDonald said the Ireland of today was not the Ireland promised in the 1916 Proclamation and it was time to realise the promise of the revolutionary generation. 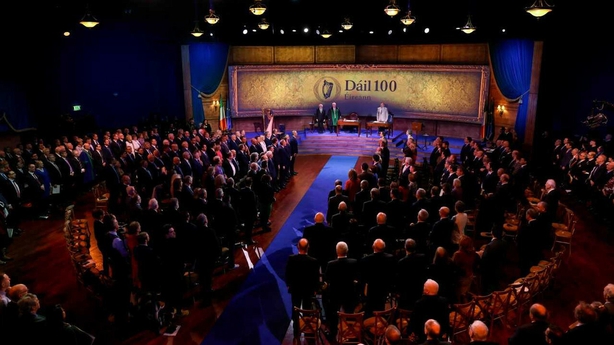 Labour Leader Brendan Howlin said his party’s decision not to stand candidates in the 1918 election opened up a pathway for the pro-independence national movement to compete head-to-head with the old Irish Parliamentary Party, resulting in "a sweeping and unambiguous public endorsement" of Irish independence.

People Before Profit TD Richard Boyd Barrett said the Irish revolution was a massive social upheaval of men, women, working people, the poor and the downtrodden.

Solidarity TD Paul Murphy said for working class people, the struggle for independence in 1919 was "bound up" with the struggle to end the grinding poverty that they faced. 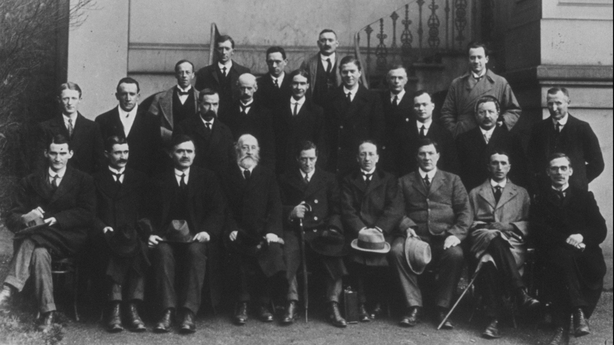 Róisín Shortall, co-leader of the Social Democrats, said that there was a need for elected representatives to recommit to their founders and redouble efforts for a fair and inclusive republic.

Green Party leader Eamon Ryan said that in order to be a beacon of hope to other nations of the world, Ireland needed to do everything in its power to achieve the 17 sustainable development goals agreed in the United Nations.

Earlier, the Ceann Comhairle said the commemoration of major moments in Irish history must have the right balance between integrity and sensitivity.

Speaking on RTÉ's News on One, Sean Ó Fearghaíl said that in order for commemorations to have integrity they "must reflect as accurately as possible the nature of the events of 100 years ago".

He said politicians in Leinster House have "gone to considerable efforts" to get the balance right in terms of the message that is communicated.