British Prime Minister Theresa May has said that it was still possible to get further clarification from the European Union on the Brexit deal to help her win parliamentary approval for it.

"My discussions with colleagues today have shown that further clarification and discussion, following the council's conclusions is, in fact, possible," she told reporters in Brussels.

She said that she was "crystal clear" to EU leaders about the need for assurances on the Irish backstop in response to MPs' concerns.

Mrs May welcomed commitments by the EU27 to try to get a new trade deal completed quickly enough that the backstop would not be needed, and said that as formal conclusions from the summit they had "legal status".

But she said that it was clear that "further clarification and discussion" is possible, and that talks will be held in the coming days.

Meanwhile, Taoiseach Leo Varadkar has said he is satisfied with the draft conclusions agreed at the European Council summit last night. 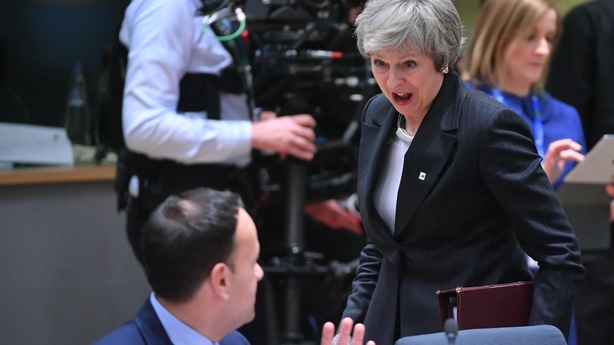 DUP leader Arlene Foster said the reaction of the EU to Mrs May's appeals for help was "unsurprising".

She said: "They are doing what they always do. The key question is whether the prime minister will stand up to them or whether she will roll over as has happened previously.

"If the prime minister had listened to our warnings and stood by her public commitments, we would not be in this situation."

In a statement issued by European Council President Donald Tusk last night, EU leaders committed to working quickly towards completing a free trade agreement by the end of 2020 so that the backstop would not be needed.

However, European Commission President Jean-Claude Juncker criticised the UK for not being clear about what it wanted from that future relationship.

EU leaders did assure Mrs May that the Brexit deal should not bind Britain forever to EU rules.

The leaders, meeting over dinner in Brussels, were responding to a plea from Mrs May after she survived a bid in her own party to oust her. 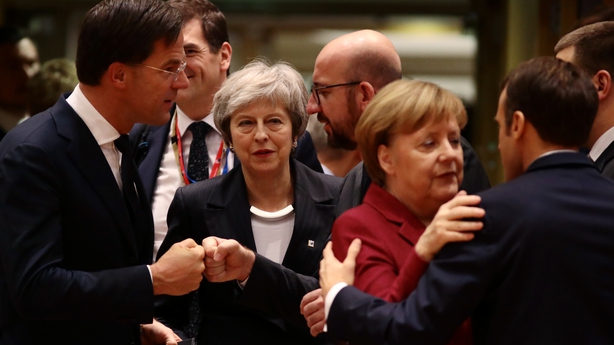 She sought help to overcome resistance at home to the backstop, which insures a hard border on the island of Ireland is avoided.

The meeting seemed only to stall for time until after Christmas, when Mrs May must win parliamentary approval for her deal or face a risk of a chaotic Brexit in March.

It is questionable the EU has done enough to ensure Mrs May can win a vote due within five weeks in a House of Commons bitterly divided over how and even whether to leave the European Union.

But it was not clear what more Brussels might offer because they cannot be sure what London still wants, EU officials said.

In a break with the norm of the past couple of years when Mrs May's statements to the other 27 leaders have been met largely with silence, she was peppered with demands for close to an hour to spell out more clearly what she was seeking.

Leaders all ruled out new, legally binding accords to amend the package. Some EU officials also ruled out any further movement.

Leaders quashed a line in an earlier draft of their statement that had held out the prospect that further "assurances" could be given in January. British officials said they were still holding out hope for further help.

"Trust me," Mrs May had told her peers, according to a British official. Warning of the risk of an "accidental" failure to get a deal, she said a majority in parliament wanted to avoid that but needed assurances the backstop was not a "trap".

One person briefed on the exchanges said Mrs May was "grilled" by leaders. "Everybody asked: What exactly do you want?," he said. "She had no solid answers."

German Chancellor Angela Merkel and others ruled out any reopening of last month's treaty aimed at easing Britain out of the EU on 29 March.

Mrs May pulled a parliamentary ratification vote this week facing a heavy defeat. If she cannot turn that around, Britain could crash out chaotically into legal limbo.

It could also ask to stop the clock or, just possibly, hold a new referendum to reverse its 2016 vote to leave – something Mrs May herself has insisted her government will not do.

"It is the union's firm determination to work speedily on a subsequent agreement that establishes by December 31, 2020, alternative arrangements, so that the backstop will not need to be triggered," the 27 EU leaders said after hearing Mrs May.

The date refers to the end of a status-quo transition period when a new EU-UK free trade pact is supposed to take effect.

"If the backstop were nevertheless to be triggered, it would apply temporarily, unless and until it is superseded by a subsequent agreement that ensures that a hard border is avoided," the leaders added, before concluding: "The backstop would only be in place for as long as strictly necessary."

For now, that assurance of what is already obvious in the treaty seems unlikely to appease its British opponents. But EU diplomats said leaders were unwilling to go further.

"Our British friends have to tell us what they want," said European Commission President Jean-Claude Juncker. "We often find ourselves in a nebulous, vague debate and it is time we got clarity."

Diplomats said Mrs May indicated she would want to come back for a second bite of "assurances" with "legal force" and some said they would be willing to listen and try to accommodate her.

But leaders also warned that the EU was prepared for Britain to leave without a deal rather than to risk unravelling its own system of close integration.

"We have postponed the showdown moment. It will come back in January," one EU diplomat said.

"There is little we can actually do to save the deal - if it falls it's because there is no will in the UK parliament."