Global warming is heating the Arctic at a record pace, driving broad environmental changes across the planet, including extreme storms in the United States and Europe, a major US scientific report has said.

Persistent heat records have assaulted the fragile Arctic for each of the past five years - a record-long warming streak, said the 2018 Arctic Report Card, released by the National Oceanic and Atmospheric Administration (NOAA).

The mounting heat in the north is upsetting typical weather patterns, a trend that "coincides" with severe winter storms in the eastern United States and an extreme cold snap in Europe in March, it said.

"Continued warming of the Arctic atmosphere and ocean are driving broad change in the environmental system in predicted and, also, unexpected ways," warned the report.

"New and rapidly emerging threats are taking form and highlighting the level of uncertainty in the breadth of environmental change that is to come."

The report was released at the American Geophysical Union's annual conference in Washington, just weeks after another damning climate assessment by federal scientists which US President Donald Trump dismissed, saying he did not "believe" it.

Asked by reporters if he had personally briefed Mr Trump on the latest Arctic findings, NOAA acting administrator Timothy Gallaudet said he had not, but he insisted that NOAA has the White House's support when it comes to scientific research.

Arctic air temperatures for the past five years, from 2014 to 2018, "have exceeded all previous records since 1900," when record-keeping began, said the peer-reviewed report compiled by 81 scientists working for governments and academia in 12 nations.

This warming trend "is unlike any other period on record," it said.

During the latest period studied, October 2017 through September 2018, annual average temperature in the Arctic was 1.7 Celsius higher than the 1981-2010 average.

The Arctic also saw the second-lowest overall sea-ice coverage and the lowest recorded winter ice in the Bering Sea.

Another key measure of ice cover is its age, and the old, thick kind is rapidly disappearing across the Arctic.

Last year, old ice made up less than 1% of the ice pack.

Over the past 33 years, very old Arctic ice has declined by 95%.

The Arctic continues to heat up at twice the rate of the rest of the planet, but the effects are far from isolated, and are now spilling over into the mid-latitudes.

That is because a warmer Arctic reduces the north-south temperature difference, which provides the main fuel for the polar jet stream, or a river of strong wind, at levels where jet aircraft fly, NOAA said.

In this warming environment, the jet stream has become wavier, a pattern that "allows warm air to penetrate farther north and cold air to plunge farther south, compared to when the jet is strong and relatively straight," said the report.

Examples include "the heat wave at the North Pole in autumn 2017, a swarm of severe winter storms in the eastern United States in 2018, and the extreme cold outbreak in Europe in March 2018 known as the 'Beast from the East.'" 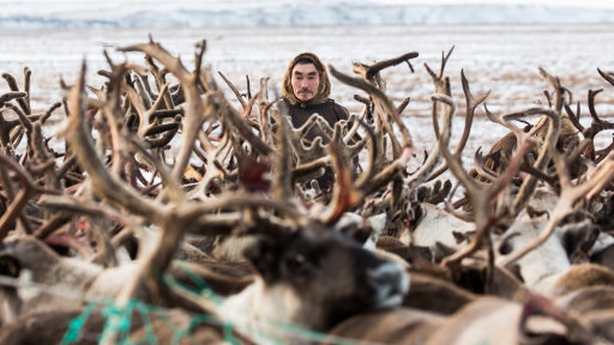 "Considerable concentrations of algal toxins have been found in the tissues of Arctic clams, seals, walrus, and whales and other marine organisms," it said.

Even though melting ice has freed up more land for grazing, herds of caribou and wild reindeer across the Arctic tundra have declined by 56% over the last two decades, cutting populations from 4.7 million to 2.1m.

"The long-term warming trend may be taking a toll on some of the Arctic's most majestic animals," said Howard Epstein, professor of environmental sciences at the University of Virginia.

Scientists attribute the decline to increased frequency of drought, which affects quality of the tundra, and longer and hotter summers which can lead to more parasites.

Another new focus of the report involved the emerging threat of marine microplastics, which scientists have discovered are accumulating in the Arctic at higher concentrations than anywhere else in the world.

"This pollution - from plastics produced and discarded in more populated areas of the world - is likely traveling with ocean currents to the Arctic," said Karen Frey, professor of geography at Clark University.

Microplastic contamination has increased over the last decade, and is a concern because seabirds and marine life can ingest debris, sickening them and interfering with a key food and income source for people who consume them, she said.