Minister for Transport Shane Ross has said the current system of a flat fine for speeding is not deterring enough motorists from exceeding the limits.

Mr Ross is planning to bring a memo to Cabinet aimed at introducing new graduated fines for people caught speeding.

The Government will consider the proposed legislation as part of the new Road Traffic Bill.

Mr Ross has said he wants to discourage and prevent motorists from speeding, given what he describes as the "appalling number of people" who are being killed as a result of speed on the roads.

He said that under the bill, the faster a driver goes, the more they will get fined and the more penalty points they will receive.

It would mean that speeding would no longer be viewed as a single offence.

Instead, those driving up to 10km/h above the speed limit could pay a fine of €80 and receive between three and five penalty points.

If you drive up to 20km/h over the allowed speed there would be a €150 fine and between four and six points placed on your licence.

Motorists driving between 20km/h and 30km/h over the speed limit will be hit with a €200 fine and up to seven penalty points.

Anyone driving in excess of 30km/h above the speed limits will be charged with dangerous driving. 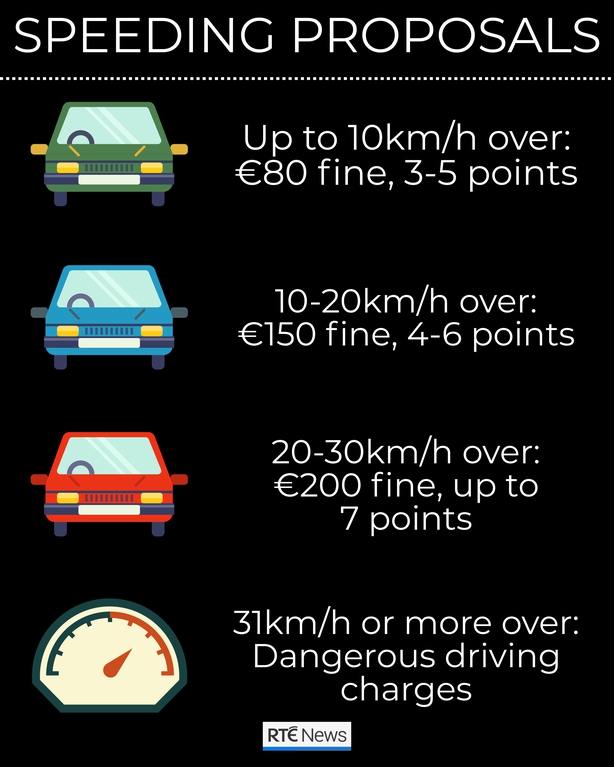 The minister will also propose the introduction of variable speed limits on the M50 in Dublin.

It would mean that the limit would change at certain times, such as when traffic is congested. Motorists would be advised of this on billboards.

Mr Ross said this move would improve both safety and the flow of traffic.