The United States, Canada and Mexico have signed a new North American trade pact, with US President Donald Trump predicting an easy passage through US Congress to approve the deal despite some opposition.

The three countries agreed on a deal in principle to govern the more than one trillion dollars of mutual trade after a year-and-a-half of acrimonious negotiations concluded with a late-night bargain just an hour before a deadline on 30 September.

Since then, the three sides have bickered over the wording and the finer points of the deal and still had not agreed just hours before officials were due to sit down and sign it as the G20 summit kicks off in Buenos Aires.

"Its been long and hard. We’ve taken a lot of barbs and a little abuse and we got there," Mr Trump said.

Legislators from the three countries still have to approve the pact, officially known as the United States-Mexico-Canada Agreement (USMCA), before it goes into effect and replaces the North American Free Trade Agreement (NAFTA). 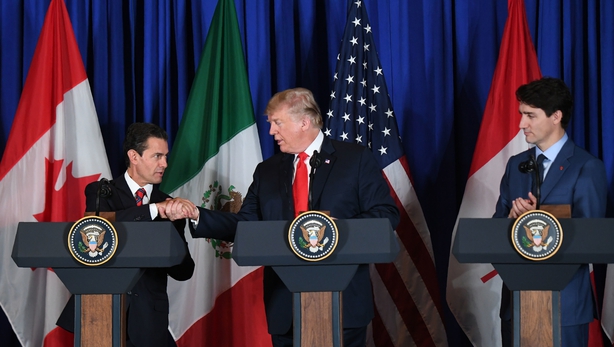 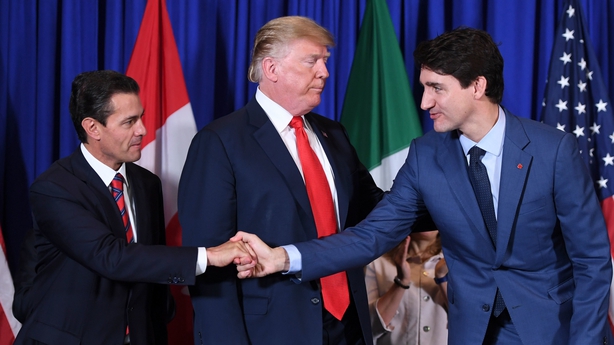 But the US trade landscape will shift significantly in January when Democrats take control of the US House of Representatives after winning midterm elections in November.

However, Mr Trump said he was confident the agreement would pass Congress.

"This was negotiated from the beginning to be a bipartisan agreement.... I think we’ll get the support of a lot of Democrats," he told reporters.

Before signing the deal he continued to refer to it as the new NAFTA.

Mr Trudeau told Mr Trump the two should continue to work together to eliminate steel and aluminium tariffs.

Based on the fact that the ships and sailors have not been returned to Ukraine from Russia, I have decided it would be best for all parties concerned to cancel my previously scheduled meeting....

....in Argentina with President Vladimir Putin. I look forward to a meaningful Summit again as soon as this situation is resolved!

Mr Trump had vowed to revamp NAFTA during his 2016 presidential election campaign.

He threatened to tear it up and withdraw the US completely at times during the negotiations, which would have left trade between the three neighbours in disarray.

Mr Trump forced Canada and Mexico to renegotiate the 24-year-old agreement because he said the existing pact encouraged US companies to move jobs to low-wage Mexico.

US objections to Canada's protected internal market for dairy products was a major challenge facing negotiators during the talks, and Mr Trump repeatedly demanded concessions and accused Canada of hurting US farmers.

BDI, Germany's main industry association, said in a statement the agreement's rules on preferential origin for the automotive sector would be stricter and more complex, calling it "a retrograde step compared with NAFTA."

Elsewhere at the summit, French President Emmanuel Macron told Saudi Crown Prince Mohammed bin Salman that Europeans will insist on international experts being part of the investigations into the murder of Saudi journalist Jamal Khashoggi, a French official has said.

In a five-minute exchange, Mr Macron conveyed "very firm" messages to the prince over the murder of Mr Khashoggi and on the need to find a political solution for the situation in Yemen, the official added.

The Saudi Gazette newspaper posted a video of the meeting online, showing the two speaking in hushed tones with their heads close together.

In the audio of the conversation, it is possible to make out the prince saying "Don't worry," to which Mr Macron responds: "I am worried".

Later in the one-minute clip posted on Twitter Mr Macron says: "You never listen to me," and Mohammed bin Salman replies: "I will listen, of course."

At the end Mr Macron can be heard saying: "I am a man of my word."

British Prime Minister Theresa May has told the Saudi Crown that he should take action to prevent the recurrence of incidents like the murder of journalist Jamal Khashoggi.

"The Prime Minister stressed the importance of ensuring that those responsible for the appalling murder of Jamal Khashoggi are held to account, and that Saudi Arabia takes action to build confidence that such a deplorable incident could not happen again," Mrs May's office said in a readout of a meeting with Prince Mohammed at the G20 summit in Argentina.

The killing of Washington Post columnist Khashoggi last month at the Saudi consulate in Istanbul has strained Saudi Arabia's ties with the West and battered Prince Mohammed's image abroad.

Saudi Arabia has said the prince had no prior knowledge of the murder.

Mrs May’s office said that the British Prime Minister encouraged the Crown Prince to ensure that Saudi Arabia co-operated fully with Turkish authorities and worked to bring both investigations to an acceptable close.

On Yemen, Mrs May set out the urgent need to bring an end to the conflict and bring relief to millions threatened by famine.

She urged concrete Saudi support for UN Special Envoy Martin Griffiths and for progress at the upcoming Stockholm talks.

Her office said: "The Prime Minister stressed that the humanitarian situation remained dire and reaffirmed UK commitment to making progress on improving the situation, including through a UN Security Council Resolution.