Fears about disruptive spot checks at the border.

Unionist concerns over moving the border to the Irish Sea.

Irish wariness of the UK government’s self-interested dealings with Brussels.

It is all there in black and white in confidential State documents seen by RTÉ. 57 year-old documents, that is.

Volume Eleven of the Royal Irish Academy’s Documents on Irish Foreign Policy series contains plenty of material that could have been written today.

The files are from 1957-61, the period leading up to Ireland’s first tilt at joining the six-member European Economic Community in 1961.

Anxiety on the island of Ireland over the implications of changing UK-Brussels relations are strikingly - some might say depressingly - familiar.

Around this time, Irish diplomats in Brussels became aware that the UK was putting out feelers about joining the EEC, which had been founded in early 1957.

It required an urgent response. How would the entry of Britain - Ireland’s biggest market - into the Community affect Ireland? The conclusion: Badly, unless Ireland entered as well. 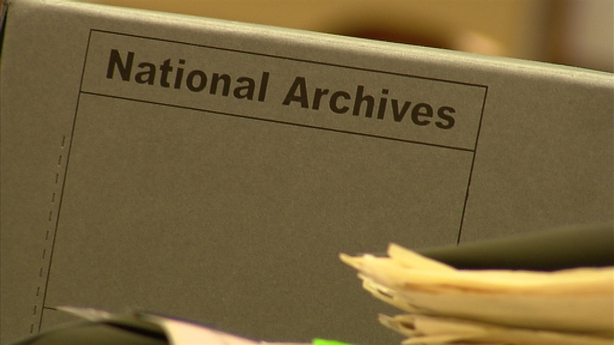 Economic development necessarily began to trump "the National Question" as an official preoccupation during the period covered in the files.

With their feet and en masse, young people were voting no confidence in a country barely older than themselves.

The poor state of the economy was, in effect, an existential threat to the political project of an independent Ireland.

Better economic relations with Northern Ireland was high on the list of priorities for boosting national development. To this end, reassuring Ulster unionists was vital.

Ireland, to paraphrase Napoleon, was lucky with the generals it had at its disposal.

T.K. Whitaker, the dynamic Secretary General of the Department of Finance, was in the process of implementing the outward-looking economic plan he completed in 1956, less than a year before the EEC was founded. 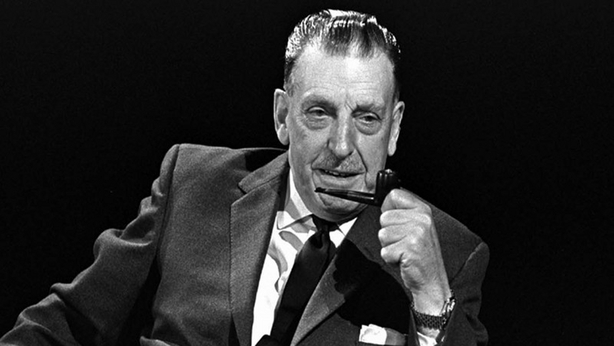 The Taoiseach, Seán Lemass, a pragmatist, was determined to see Ireland break with its introspective doctrine of economic self-sufficiency.

He possessed many of the skills required (political acumen and poker-playing among them) to drive his vision.

In particular, Lemass wanted Whitaker’s plan (commissioned under the previous government), with foreign direct investment at its heart, implemented.

Lemass was also determined to increase Ireland’s global diplomatic footprint by expanding the reach of its diplomatic corps, which was already active and effective in the UN.

Ecomomic isolation through a UK-only entry into the EEC would have been detrimental to this strategy and the country’s development.

Whatever about Ireland’s luck with regard to the personalities handling the levers of power, it was less lucky with the political climate on the island.

By the time Lemass succeeded Éamon de Valera as Taoiseach in 1959 and began his outreach to Belfast, the IRA was three years into its six-year Border Campaign.

Attacks along the border with Northern Ireland resulted in requests to Dublin by British authorities for intensive baggage checks for arms.

Official correspondence from this time raises some familiar issues, the disruption of a hard border and the massive increase in resources needed to monitor it among them.

Friction on the border, as it is called today, is the main theme of correspondence from R P Rice of the Revenue Commissioners to Thomas J. Coyne, Secretary General at the Department of Justice dated 29 June 1957:

"It is far easier to smuggle arms outwards by the unapproved roads or across country as is done in ordinary smuggling. The imposition of a spot check on cars going out by the approved roads is therefore likely to lead to no worthwhile results and would not be likely to impress the British authorities.

"It would of course cause delay and congestion at the exit points and an appreciable number of extra staff would be necessary as we would have to apply the check at all frontier posts on the Border. The traffic at many of these posts is very dense, particularly in summer. For instance at Carrickcarnan, which is the busiest place, 1,000 exits a day is common at peak periods; it never falls below 500."

Unionist fears over a hidden agenda by Dublin to gradually erase the border in the guise of economic co-operation would also be familiar to followers of the Brexit debate. 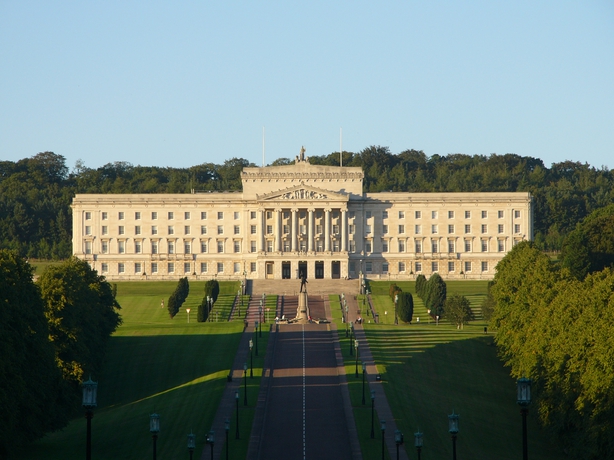 In his speech, he characterised Lemass’s push for greater economic integration as an attempt to "draw a line round Northern Ireland goods, separating them from those made in Great Britain" and in particularly familiar terms as "the first step in moving the Border to the Irish Sea".

This, Brookeborough feared, would do "the real damage" to Northern Ireland’s position in the UK.

Lemass’s plans to address these concerns in a speech to be delivered (also in Queen’s) in December 1960 never came to pass.

His visit was cancelled and the speech was filed away due to the killing of an RUC officer by the IRA.

The familiar ground in the documents is not limited to North-South relations.

The current UK Prime Minister’s advisers might well read other correspondence with a tight, knowing smile.

The Irish Ambassador to Britain reported back to the Department of External Affairs (now Foreign Affairs and Trade) that Britain was exasperated with Unionist attitudes, like those of Brookeborough, to all-island economic co-operation.

Hugh McCann, the Irish Ambassador to London reported on a lunch conversation with Sir Horace Algernon Fraser Rumbold of the Commonwealth Relations Office. Rumbold described Belfast attitudes as "dog in the manger", according to a May 1960 letter.

Rumbold, Gallagher reported, believed the Stormont government had "sacrificed their economic interests because of their political apprehensions" and opined "a lot of people would have to die off first [before co-operation happened] - some them are not so old".

"Rumbold was not entirely sympathetic to the stand taken by the six counties", McCann concluded.

By 1961 the discussion of EEC entry was in full swing in the civil service.

The border, customs and Unionist concerns were running themes, as shown by a memorandum from July of that year titled 'Political Implications of Membership of the European Economic Community'.

"It is true that the Customs frontier could be largely if not entirely removed at any time by our unilateral action, but that such a result could be achieved otherwise does not detract from the advantages in this particular respect of membership of the EEC," the memorandum stated.

"These advantages are all the more attractive in present circumstances, having regard to the extraordinary persistence with which the Belfast Administration refuses to envisage closer economic arrangements with us which do not apply to the United Kingdom as a whole, and - even though there are sound objective reasons (in particular geographic unity) which militate in favour of such arrangements." 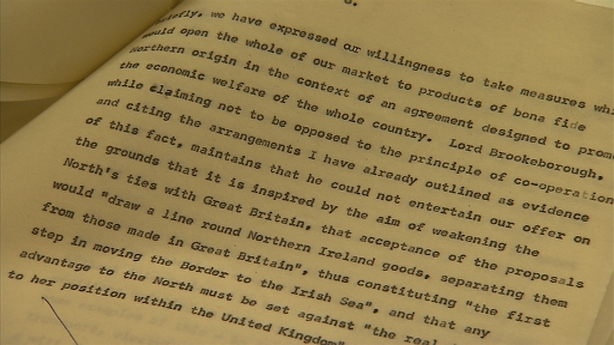 Some of the six members of the EEC also sounded out Ireland’s diplomats on Ireland’s political expectations of entry to the community, particularly with respect to partition.

It is apt that a matter of such concern to northern unionists - King William of Orange’s greatest admirers - is revealed in an account of a conversation with the Dutch foreign minister held on The Twelfth.

Report from Ireland’s Ambassador to the Netherlands, Brian Gallagher, to Secretary General of the Department of External Affairs, Con Cremin, 12 July 1961.

"He also asked me whether we thought our accession to the Community would help us in connexion [sic] with our Partition problem. I said I did not think it would have any direct effect, but indirectly it could help to bring nearer the end of Partition. The eventual disappearance of the customs border between the North and the South would clearly be a step in the right direction. However this was not the motivation of our approach, the reasons for which were economic rather than political."

The outreach to the Netherlands and other countries reflected a growing feeling in Dublin that Ireland’s interests would not be to the fore in UK-Brussels discussions and that the State needed to vigorously advance its own agenda.

Correspondence from the top diplomat at the Department of External Affairs, Con Cremin, shows how widely that view was shared here.

"I think we always accepted the fact that Britain would not pay too much regard to the interests of others if doing so seriously interfered with the possibilities of making a satisfactory arrangement for herself with the EEC."

Ultimately the UK did not enter the EEC in 1961 - France, specifically President Charles de Gaulle played a role in delaying the ambitions of HM’s Government, seeing the UK as a US proxy.

Ireland entered the EEC in 1973 at the same time as the British, and Denmark, and the passing of 12 years was arguably to Ireland’s advantage.

Diplomats had more time to learn the ways of Brussels diplomacy and hone negotiating skills for accession (although not to the satisfaction of Ireland’s fishing community, perhaps).

Hopes of the contentious issues raised in the historic documents being put to bed by joint Irish-UK accession in 1973 were ill-founded. Even in 2018, they haven’t gone away, you know.

More information on Volume Eleven of Documents on Irish Foreign Policy, covering the period 1957 to 1961 available from https://www.difp.ie/ and @difp_ria