Taoiseach Leo Varadkar has said that a deal between Britain and the European Union on Brexit was possible within weeks.

Speaking at the British-Irish Council summit on the Isle of Man, Mr Varadkar said he was hopeful a Brexit deal could be done by the end of the year but it would not amount to a "clean break" as talks would have to continue.

Taoiseach says it is more likely than not that a Brexit deal can be concluded in the next few weeks pic.twitter.com/anM7zIDyIt

He also cautioned that a successful outcome was not guaranteed adding that a lot could still go wrong and that any agreement would have to be ratified by Britain and the EU.

Mr Varadkar went on to say that his objective on trade was to "avoid the emergence of any new borders."

A huge amount of Ireland's trade with continental Europe passed through Welsh ports and across Britain on its way to Calais, while much of Northern Ireland's trade with the British mainland goes via Dublin port, and alternative routes by boat to Rotterdam, Antwerp and French ports were "much slower", he said. 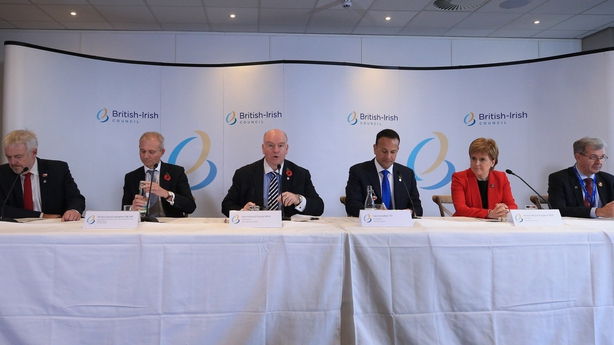 "My objective when it comes to trade is to do everything we can to avoid the emergence of any new borders among any of us," said Mr Varadkar.

"That's what the European Union gave us - border-free trade between Britain and Ireland and all the EU.

"The fact that Brexit is happening makes that difficult to replicate, but our objective as an Irish Government is to do that to the extent that we can, in order to allow people to travel freely as they have done for so long now, but also to allow trade to function as it does now."

Minister for Justice Charlie Flanagan said the issue of British Prime Minister Theresa May writing to the DUP was an internal UK matter, but said there was a real deep feeling of uncertainty among communities with regard to the border.

He said the Government was please that Irish priorities had been retained but there was still a lot of work to do.

Mr Flanagan added that he was keen to ensure the Common Travel Area and good relations with the UK would remain and there would be no hard border.