Voters have overwhelmingly supported the proposal to remove the prohibition on blasphemy from the Constitution, according to a Red C exit poll for RTÉ.

According to the exit poll, 71.1% supported the change, with 26.3% voting against, 1.8% saying they had not voted on the blasphemy referendum and 0.8% said they did not know or refused to indicate which way they voted. 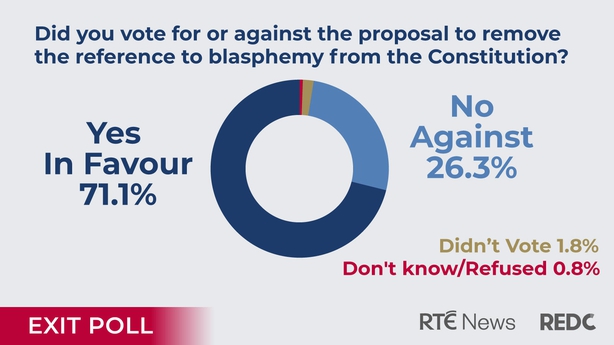 There had been an expectation that the level of abstainers would be higher, given that the Presidential campaign received much more attention.

If reflected in the actual referendum result, the Constitution will be changed to remove the requirement to legislate against blasphemy.

Blasphemy was included as a crime in the 2009 Defamation Act because of this Constitutional provision, which now looks certain to be repealed.