The brother of a young victim of the Shankill bombing in Belfast 25 years ago has said the IRA attack totally destroyed his family.

Gary Murray's 13-year-old sister Leanne was among ten people - including one of the bombers - killed in the bombing of Frizzell's fish shop on 23 October 1993.

Speaking on RTÉ's Morning Ireland, Mr Murray, who was 15 at the time, described his sister as a bubbly and smart girl who wanted to be a nursery school teacher or a nurse.

He said the family struggled to cope in the aftermath of her death.

Mr Murray said he and his family will join other relatives of those killed at a church service in Belfast today.

Last night hundreds of people took part in a procession along the Shankill Road to remember the 26 people, including four children, in attacks on the road between 1971 and 1993.

The most deadly was the bombing of Frizzell's fish shop, which also saw around 57 people injured.

Mr Murray said as his mother searched for her daughter, Kelly was laying on the ground calling for help.

He said as people searched the rubble for victims, "they actually got Sean Kelly and put him in one of the ambulances with a wee lad who was injured ... so Sean Kelly has the people of the Shankill to thank for being alive, because they helped him that day."

The IRA said later the targets were loyalists from the Ulster Defence Association who they thought were meeting in an office above the shop, but the office was empty.

The old building collapsed in a pile of rubble, sending a cloud of dust billowing across the road.

Families of those who lost loved ones in the Shankill bombing took part in a service at West Kirk Presbyterian Church to mark the anniversary.

A bell was rang nine time to remember the victims. 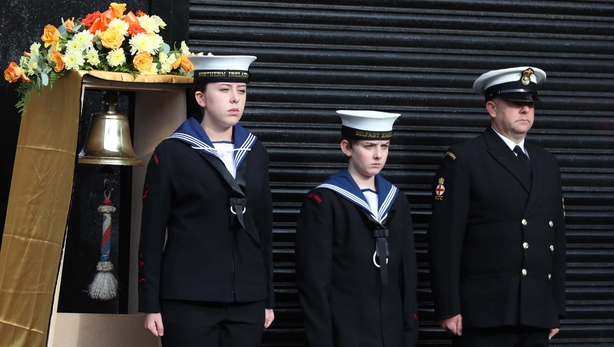 DUP leader Arlene Foster spoke to Gina Murray and paid tribute to the memorial events which have taken place over the last week.

"I think the message today that we were given during the service of hope is one that will resonate very well with the families and I know it's been a great comfort to them," she said.

She added: "I think it was wonderful to have a cross-community presence here today, people showing solidarity with victims, innocent people who were out shopping on a Saturday afternoon and whose lives were snuffed out, for no reason.

"It's been very humbling to be here today with the families to stand in solidarity with them."

RTÉ report on Shankill bombing from 1993

Yesterday evening's procession started at Shankill Leisure Centre, close to where the Balmoral Showrooms once stood.

Four people, including 17-month-old Colin Nicholl, were killed in a bomb at the premises on 11 December 1971, which was attributed to the IRA.

Colin's father Jackie laid a wreath in memory of his young son.

He described the procession as "very poignant", and also spoke of his gratitude to the people of the Shankill Road who came together in the aftermath of the blast to dig through the rubble to rescue survivors.

"I will always be grateful to the people of the Shankill," he said.

A cross made out of poppies was placed on walls at each of the locations. 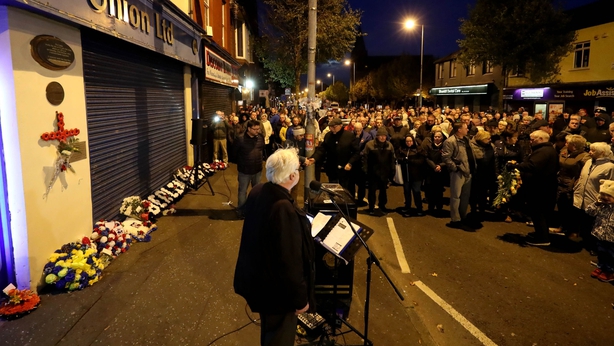 As the procession made its way up the Shankill Road, an act of remembrance was carried out at each site.

Local clergy took part in readings and the names of those killed were read out. Up to 300 people took part in the event. 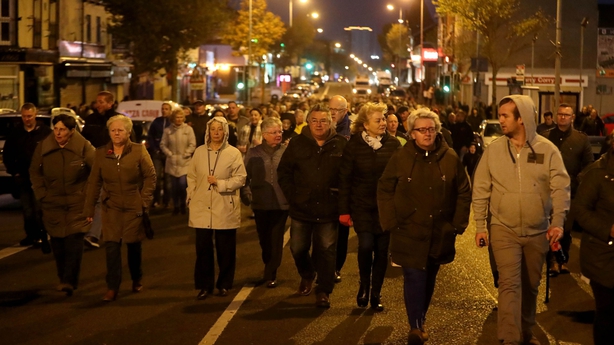 Respects were paid at the site of the Bayardo Bar, at which five people died in an IRA bomb attack on 13 August 1975.

Next was the site of Frizzell's fish shop where a number of families who lost people that bombing comforted each other after laying wreaths and pausing for a moment of reflection.

The procession next paused at the site which used to be the Four Step Inn, where on 29 September 1971 two men were killed in an explosion.

It finished at the Mountainview Tavern at the top of the Shankill Road, where on 5 April 1975, five were killed in a gun and bomb attack.

One of the organisers of the event, Jackie Redpath, described it as a "peaceful reflection".

"Tuesday is the 25th anniversary of what has become known as the Shankill bomb, but there was another four lethal attacks on this road," he said.

"It is important to recognise that for all the families and this community who carry the scars."

DUP councillor Brian Kingston was among the procession. He said the event had been organised by local clergy and community representatives to show support to the families who had lost loved ones in the attacks.

"There was no anger, it was about wanting to remember those who had died and support their families," he said.