US President Donald Trump has ordered the FBI to reopen a background investigation into his Supreme Court nominee, Brett Kavanaugh, at the request of a Republican-led committee.

The supplemental background investigation would be limited to "current credible allegations" against Mr Kavanaugh and must be completed in one week, the committee has said.

Earlier the Senate Judiciary Committee approved Mr Trump's nomination of Mr Kavanaugh to the US Supreme Court, but moderate Republican Senator Jeff Flake called for an FBI investigation into sexual misconduct allegations against the judge before a final Senate vote.

Democrats had already called for an FBI probe, but Republicans had opposed the move.

It remained unclear if Republicans have the votes to confirm Mr Kavanaugh on the Senate floor. Republicans hold a slim Senate 51-49 majority, with another Republican moderate - Lisa Murkowski - also saying she supports the idea of a delay.

The defections by Mr Flake and Ms Murkowski could doom Mr Kavanaugh's nomination, given the likelihood of universal Democratic opposition.

A lawyer for a high school friend of Mr Kavanaugh who university professor Christine Blasey Ford alleges witnessed an incident of sexual misconduct involving Mr Kavanaugh, has said his client would be willing to cooperate with an FBI investigation.

The lawyer said Mark Judge would answer any and all questions posed to him. 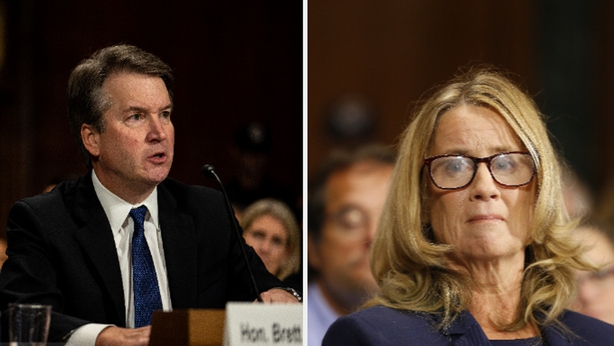 "This country's being ripped apart here," Mr Flake, with a pained look on his face, told his fellow senators. "... I think we can have a short pause," Mr Flake added.

"We ought to do what we can to make sure that we do all due diligence with a nomination this important," Mr Flake added.

It was unclear yet if an FBI investigation will take place.

"All I've said to Senator Flake is I would advocate for the position he took but I don't control that," said Senator Chuck Grassley, the Republican chairman of the committee.

Just before the scheduled vote in the Judiciary Committee, Mr Flake left the committee room to talk to some Democrats, adding new turmoil to the proceedings.

During the delay, senators and aides could be seen in the committee room having hushed conversations, with some going back and forth to an anteroom of the committee chamber.

Earlier in the day Mr Flake, who had previously raised concerns about the allegations against Mr Kavanaugh, said Dr Ford gave "compelling testimony" but Mr Kavanaugh provided "a persuasive response".

Soon after Mr Flake made his announcement that he would vote for Mr Kavanaugh in the committee, the senator was confronted in an elevator while on his way to the committee meeting by two protesters who said they were sexual assault survivors.

'You're telling all women that they don't matter': Protesters confront Republican US Senator Jeff Flake pic.twitter.com/0ABnLZ0MLG

"That's what you're telling all women in America - that they don't matter, they should just keep it to themselves," one of the protesters shouted at Flake in an exchange aired by CNN.

"I need to go to my hearing. I've issued my statement," Mr Flake said.

As the committee, with 11 Republicans and ten Democrats, set its vote, some Democrats left the room in protest.

Mr Grassley said he found yesterday's testimony from both Dr Ford and Mr Kavanaugh "credible" but added: "There's simply no reason to deny Judge Kavanaugh a seat on the Supreme Court on the basis of evidence presented to us."

The timing of the panel's session gave committee members little time to review yesterday's extraordinary testimony from Mr Kavanaugh and Dr Ford, who accused him of sexually assaulting her when they were high school students in 1982.

Mr Kavanaugh forcefully denied the accusations and accused Democrats of a "calculated and orchestrated political hit".

"This was someone who was aggressive and belligerent. I have never seen someone who wants to be elevated to the highest court in the country behave in that manner. In stark contrast, the person who testified yesterday and demonstrated a balanced temperament was Dr Ford," Ms Feinstein said.

Another Democrat, Amy Klobuchar, noted that Mr Grassley had thanked Dr Ford for her bravery but nevertheless failed to back any further investigation.

"Where is the bravery in this room?" Ms Klobuchar asked.