A fire at Glasgow's renowned School of Art has been largely contained after causing "extensive" damage to the historic building, the fire service said.

Around 50 firefighters are still working to extinguish the fire, which broke out at around 11.20pm last night and spread to the nearby O2 ABC.

It is just four years since the Charles Rennie Mackintosh building was badly damaged in another blaze.

The Scottish Fire and Rescue Service (SFRS) said the building had been "extensively damaged" including multimillion-pound restoration work carried out in the aftermath of the previous fire. No one has been reported injured.

SFRS area manager David Young said: "The fire has now largely been contained, but this remains a protracted incident and our efforts very much continue at this stage to extinguish the fire and ensure the community is protected".

Scotland's First Minister Nicola Sturgeon said: "This is a very sad morning in the city of Glasgow. Glasgow School of Art is an institution that is loved not just by its students, staff and the people of this city, but by many around the world.

"First and foremost my thoughts are for the safety of people. At this stage it appears there are no casualties and I hope that continues to be the case.

"The professionalism and bravery of the fire service, and the rest of the emergency services, was once again demonstrated last night. This is clearly an extremely complex and large-scale incident, and one that is ongoing. I would like to thank the emergency services for their continued efforts." 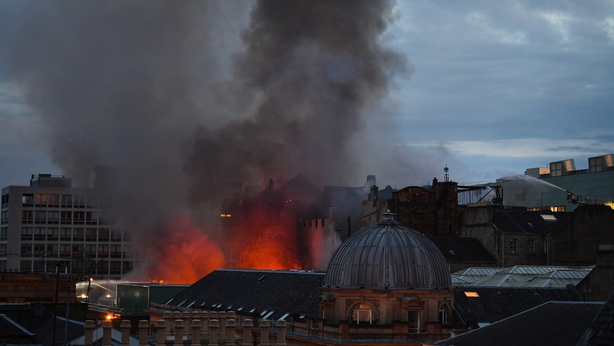 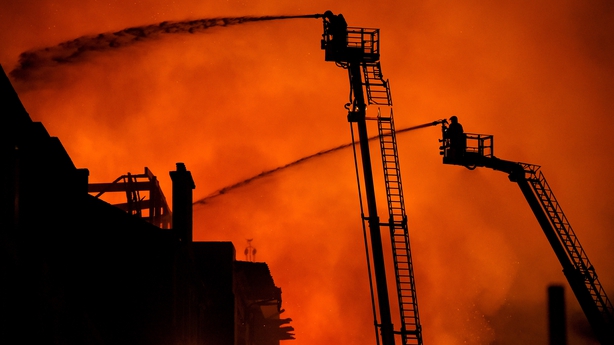 Ms Sturgeon said the Scottish government was ready to provide "any support that may be required, now and in the period ahead".

Former students at the art school spoke of their disbelief and sadness.

Margaret Archbold, 48, a Glasgow artist who studied fine art at the school and graduated in 1994, said she had come down to the cordons around the building to "say goodbye".

She said: "It just keeps getting kicked in the teeth. It shouldn't have happened again.

"It was graduation day yesterday for this year's students. I just feel really sorry for the fire brigade because they worked so hard to save it the last time.

"I came down to say goodbye actually, I thought there was nothing left, and I was quite an important time in my life. I'm an artist and my uncle's an artist - he studied here too- and I just needed to come and see it."

Sam Patterson, 30, is vice president of the Glasgow Institute of Architects and studied architecture at the art school for five years.

Watching as firefighters hosed the building, he said there was a sense of "disbelief".

Mr Patterson, who graduated in 2012, said: "One of the first architecture books I bought as a first year student about to move to Glasgow was 100 buildings of the 20th century and page one was Glasgow School of Art.

"It's a shocker, especially in Mackintosh's 150th anniversary and so close to being completed".

"(The fire) reached from the ground floor right through to the roof. It is significantly damaged," he said.

The blaze was a "devastating loss for Glasgow", with firefighters dealing with a "sense of loss" along with the city's people, he said.

A restoration project, which was set to cost between #20 million and #35 million, had been returning the famous art school to its former glory after a devastating fire in 2014, with Brad Pitt and Peter Capaldi among those lending their support.

Stuart Robertson, director of the Charles Rennie Mackintosh Society, said the fire was "terrible" and a "massive body blow" and would be "sending shock waves around the world". 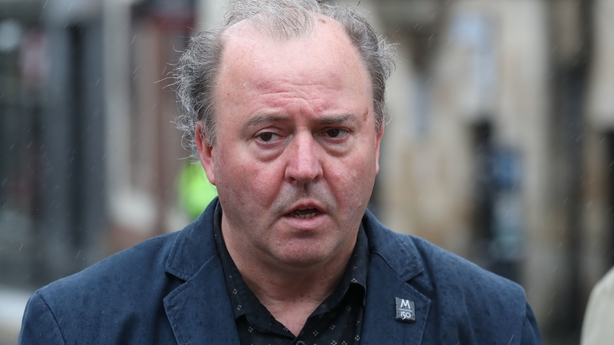 He said: "This is a world class building. With all the restoration work going on it's just horrendous, I can't really believe it.

"I've only seen glimpses, and what the firemen are saying, reading between the lines it looks bad. The last time they stopped it going into the east wing this

time it looks as though it's gone from the east wing all the way through.

"To see some of the work and the beautiful craftsmanship that's gone on and I'd seen a glimpse of the new library taking shape and the studio work and all the painstaking work that's gone into the restoration is just...people must feel sick."