A problem with Visa's European authorisation system has caused disruption to some Visa credit and debit transactions.

However this evening, a spokesperson for Visa said that cards are currently operating "at close to normal levels".

Master Card was not affected by the issue.

Customers were advised to use their ATM cards in the banks with which they have accounts.

Attempts to withdraw cash at other banks may be affected as the transactions are processed through Visa.

Irish banks are fielding a high volume of calls to customer service lines and communicating with customers via social media.

Bank of Ireland has said it is aware of an issue with Visa Debit cards, and that account holders can make cash withdrawals at any Bank of Ireland ATM.

Permanent TSB also said that its Visa Debit cards can be used at the bank's ATM.

However, it reported that people have only been able to successfully use them at point-of-sale outlets intermittently. 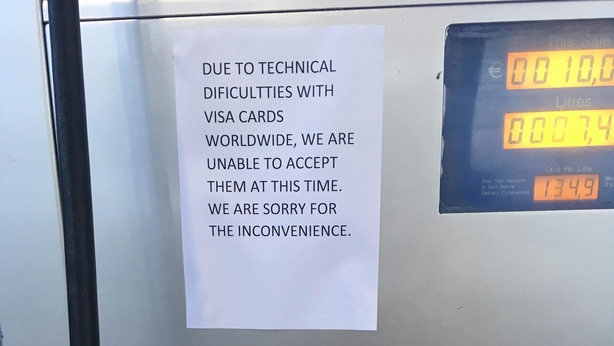 AIB said it is aware of intermittent issues with AIB cards and is working to resolve the matter.

"We have been informed that Visa has corrected the outage and transactions are now starting to go through.

"There is still some intermittency however, we believe this is due to a backlog of transactions," it said.

"We now understand that contactless transactions have a better chance of going through.