The people of Ireland didn't just shout, they roared.

Those words sum up what has happened at polling stations across the country. The comment was made this morning by Orla O'Connor of the National Women's Council, who is also co-director of the Together for Yes group.

She was responding to the RTÉ exit poll, which showed an emphatic result for the Yes side. It predicted that 69.4% of people have voted Yes, while 30.6% voted No.

The tallies coming through from constituencies around the country have been echoing those trends. It is historic. It is momentous. It was predicted, but never on such a scale.

In the RTÉ exit poll, voters were asked to predict the outcome of the referendum. They believed 52% would vote Yes, 39% No. Other pollsters adopted a similar approach for the same-sex marriage referendum in 2015 in a bid to depersonalise the issue and get a more accurate estimate of the outcome.

They had been burnt by the Seanad referendum when the opinion polls broadly got it wrong. Back in 2015 for the same-sex marriage poll, the new approach worked.

However, the exit polls for the referendum on the Eighth Amendment suggest a landslide for the Yes side. The last Behaviour and Attitudes poll for the Sunday Times is the only one in tune with the exit polls. So why has this come as such as a shock?

Over the last few months, we have heard so much about the quiet voter. Many predicted they were in favour of a No vote, but did not want to reveal their voting intentions. However, it has been very much a case of mistaken identity. Those shy voters wanted to repeal the Eighth Amendment. It seems they had also made up their minds a long time ago.

One of the extraordinary pieces of information gleaned from the exit poll is that 76% of voters had not changed their minds on abortion over the last five years and 86% did not change their minds about how they would vote during the referendum campaign. Their minds were made up and they were not for turning. 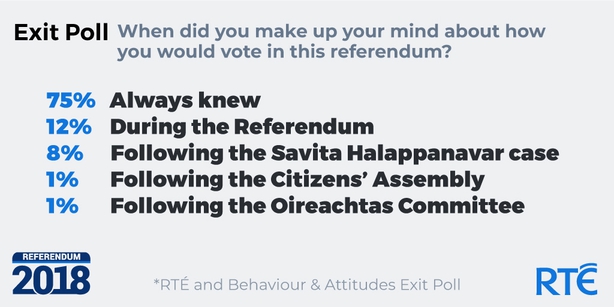 Despite so much focus on the beliefs of our politicians, the biggest influencers were the people, and in particular the women who came forward to tell their stories. Stories that were never aired in such a way or in such numbers not only in 1983, but in 1992 and 2002 - the previous occasions the electorate voted on abortion.

I remember doing a series for Morning Ireland during the 2002 referendum when people were asked to exclude suicide as a reason for terminations. I managed to interview two women. The woman who had an abortion wanted to remain anonymous in my report. But it was viewed as significant that I had even got anyone to talk about their experience.

I remember the BBC calling me after my report as they were having similar trouble. They wanted to know if the woman I had interviewed would also contribute to a report they were doing.

In 2018, Ireland is a very different country. In this 'once in a generation' poll, women came forward from all sides and told their stories on the record. They did so quietly but effectively. And the polling data shows that voters listened.

It is also clear that the influence of religious leaders has diminished. Just in one in ten of those surveyed cited religious views as an influencing factor in how they voted. Now think back to 1983.

The influence of politicians is also under scrutiny. There were very few national politicians in 2015 who advocated against same-sex marriage.

This time, all the leaders of the political parties supported repeal. But there are many politicians, some vocal and some quiet, who wanted to retain the Eighth Amendment. But they seem to be out of touch with the majority of voters on this issue.

In 1983 Ireland was a Catholic country. Ireland in 2018 is a changed place and particularly for women.