Britain’s Prince Harry and US actress Meghan Markle tied the knot this afternoon in a star-studded Windsor Castle ceremony watched around the world.

The new Duke and Duchess of Sussex exchanged vows at the altar in St George's Chapel in an emotional service, sealed with a kiss, that brought US TV star into the heart of the British monarchy.

As more than 100,000 people packed the sun-baked Windsor streets, Queen Elizabeth II and the royal family were joined in the chapel by stars including Oprah Winfrey, Elton John, George Clooney and David Beckham. 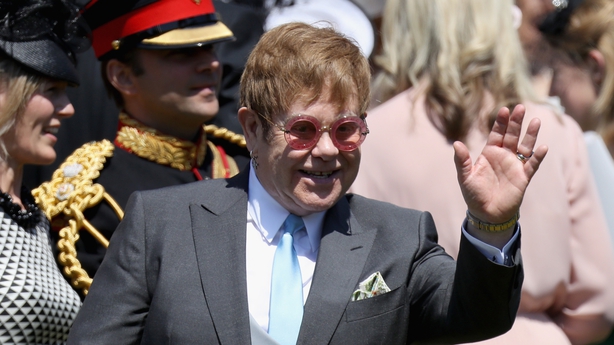 The couple held hands throughout and exchanged vows in a traditional Church of England wedding featuring some unusual twists.

Firebrand US pastor Michael Curry delivered a full-throttle address invoking slaves and the power of love, and a gospel choir sang "Stand By Me".

With the words "I will", 33-year-old Harry, and Meghan, 36, declared they would love, comfort, honour and protect each other.

Archbishop of Canterbury Justin Welby, the Church of England's spiritual leader, declared them husband and wife.

With her father recovering from a heart operation in Mexico, the Duchess walked down the aisle on her own, before being accompanied to the altar by Harry's father Prince Charles.

Thomas Markle followed his daughter's wedding on TV and voiced regret he was unable to attend, US celebrity news website TMZ reported.

"My baby looks beautiful and she looks very happy. I wish I were there," he was quoted as saying. 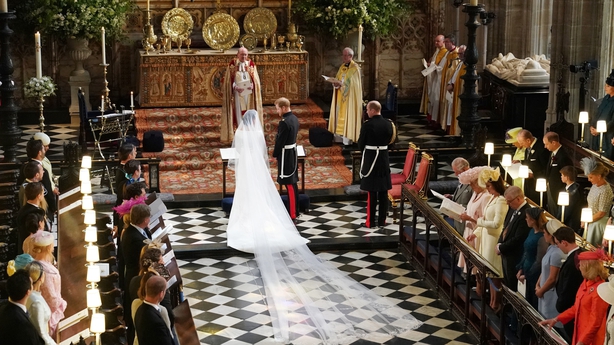 It contained floral designs from her native California and all 53 Commonwealth countries.

Her bouquet included flowers hand-picked by Harry from the gardens of their Kensington Palace home. She wore queen Mary's 1932 diamond bandeau tiara.

Prince Harry wore the blue doeskin frockcoat uniform of a major in the Blues and Royals, the regiment he served with in Afghanistan during his ten years in the British army. His brother and best man Prince William wore a matching uniform.

"You look amazing," Harry told his bride as she arrived.

He smiled at her as they heard how marriage is "the foundation of family life in which children are born".

The couple grinned during Curry's booming address about the power of love.

"I'm talking about some power. Real power. Power to change the world," the African-American preacher intoned.

The Duchess’s ring was made from Welsh gold, as is traditional for royal weddings, while Harry's was made of platinum.

Before the wedding, Queen Elizabeth conferred the title Duke of Sussex on her grandson, meaning Ms Markle will be known as the Duchess of Sussex.

The couple kissed on the church's West Steps after the wedding, before going on a carriage procession ride through Windsor where tens of thousands of flag-waving well-wishers cheered them on. 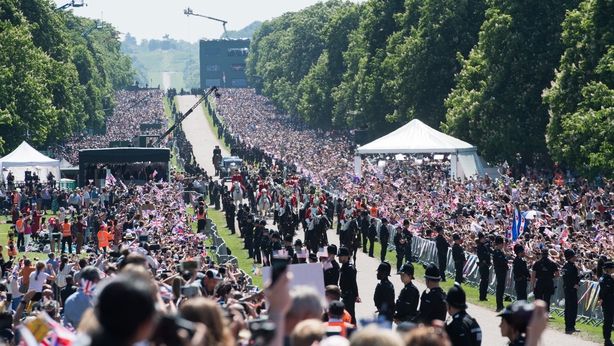 Hundreds of street parties were held around Britain and there were public screenings in pubs up and down the country.

After the procession, Queen Elizabeth gave a lunch reception inside Windsor Castle for the 600 guests.

They were treated to canapes including Scottish langoustines, English asparagus and Windsor lamb.

The royal couple were to cut the lemon and elderflower cake, while Charles, Harry and Meghan were to make speeches introduced by William.

The couple met on a blind date in July 2016 and had a whirlwind romance, criss-crossing the Atlantic as she continued filming in Toronto.

The Duke and Duchess of Sussex depart Windsor Castle for a reception hosted by The Prince of Wales at Frogmore House, in a silver blue Jaguar E-Type Concept Zero. This vehicle was originally manufactured in 1968, and has since been converted to electric power #RoyalWedding pic.twitter.com/hRrxEUlFlJ