Foreign ministers from the G7 industrialised nations are united in opposing Russia's destabilising behaviour while agreeing to leave the door open for dialogue, a senior US official has said.

The ministers, meeting in Toronto for two days, discussed tension with Moscow, Iran and North Korea, while also addressing political problems in Venezuela and Myanmar.

"There was G7 unity on opposing Russia's malign behaviour," the senior State Department official, speaking on condition of anonymity, told reporters at the end of the first day of meetings in Toronto.

"There was also openness among G7 members to dialogue with Russia while we hold them accountable for their malign activities and their efforts to destabilise nations," the official added.

The ministers are expected to issue a final statement later that would maintain an uncompromising line with Russia, two sources familiar with discussions said.

"The language will be tough because of what the Russians have done until now. But it can also be interpreted as leaving the door open," said one source.

"We are saying to them, 'If you want to be treated as a great power, then work with us'," the source said.

"We know that the Syrian conflict, for example, can't be solved without Russia. But it must then come up with constructive offers in return," he told reporters.

The G7 meeting is the first high-level gathering of the allies since the United States, France and Britain launched 105 missiles targeting chemical weapons facilities in Syria in retaliation for a suspected poison gas attack on 7 April.

The Western countries blame Mr Assad for the attack that killed dozens of people. The Syrian government and its Russian ally deny involvement or using poison gas.

The State Department official said there was broad support among the ministers for the UN-led "Geneva Process" that outlines a political transition in Syria in which Mr Assad would step aside.

"The political process that comes out of any war has ups and downs. The Geneva Process is the present focus of making political progress," the official added. 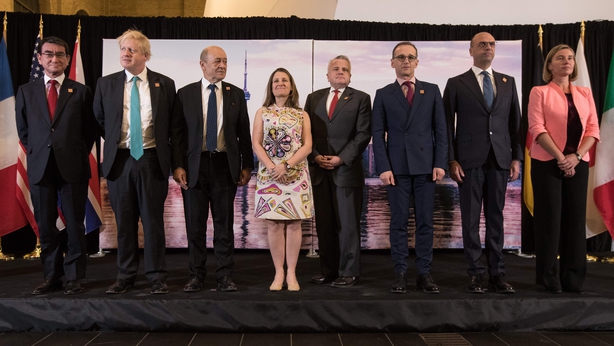 The foreign ministers' talks, due to end late tonight, will help prepare for a G7 leaders' summit in Canada in early June. The G7 comprises the United States, Britain, Canada, Germany, France, Italy and Japan.

The G7 last week condemned what it said was a Russian nerve agent attack in Britain.

A senior official from one G7 nation said ministers were deeply worried about what the group saw as a pattern of Russian misbehaviour going back years.

Russia denies any involvement in the nerve attack on British soil in March.

The meetings are not expected to discuss further punitive measures against Russia because Britain, France, Germany and Italy are EU members, which must agree collectively on what steps to take, said two diplomats briefed on the meeting.

The issue, however, was likely to be raised in bilateral talks between G7 members, one official added.

The foreign ministers also discussed negotiations under way between the United States, Britain, France and Germany on making changes to a 2015 nuclear deal between Iran and six leading powers, the State Department official said.

US President Donald Trump gave an ultimatum on 12 January to the European powers, saying they must agree to "fix the terrible flaws" of the deal or he would refuse to extend the US sanctions relief on Iran that it calls for.

US sanctions will resume unless Mr Trump again waives them on 12 May.

Iran says its nuclear programme is only for peaceful purposes. It has said it will stick to the accord as long as the other signatories respect it, but will "shred" the deal if the US pulls out.

Iranian President Hassan Rouhani said on Saturday Iran's atomic agency was ready with "expected and unexpected" reactions if the US pulls out of the 2015 agreement.

"One of the things we are concerned about now is the (deal) and where that is headed," British Foreign Secretary Boris Johnson said on the sidelines of the G7 meeting.

The ministers had "good discussions" on North Korea's nuclear programmes as Mr Trump and North Korean leader Kim Jong-un prepare to meet in late May or early June.

North Korea said on Saturday it would suspend nuclear and missile tests and scrap its nuclear test site.