Former taoiseach Bertie Ahern has said the Government could have to "play hard ball" with Britain over Brexit.

Mr Ahern, who was one of the key figures behind the Good Friday Agreement, said Ireland should insist the UK stays closely aligned with the Republic of Ireland after EU withdrawal.

Asked whether Ireland should take a tough stance in negotiations over cross-border trade and alignment, Mr Ahern told BBC2's Newsnight: "I'm afraid the answer to that is we have to play hard ball.

"Let's say customs union equals trade agreement. If that trade agreement is fairly close with what's presently there, I think, forget about Ireland for a minute, I think that would be good for the UK's economy."

Mr Ahern, who said Brexit is a "disaster for Ireland", insisted any return to a physical border would not be acceptable.

"There never will be a border. There is not going to be a physical border across Ireland because if you tried to put it there you wouldn't have to wait for terrorism to take it down, people would just physically pull it down - the ordinary people." 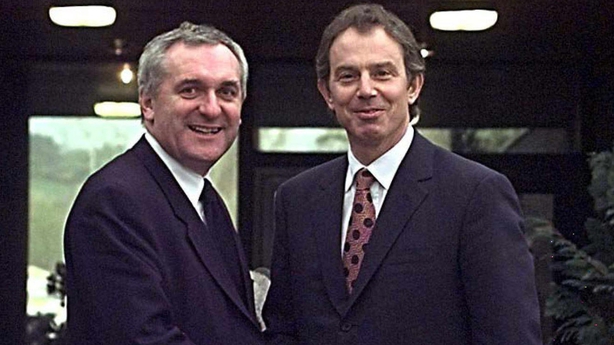 The former taoiseach said it was not the right time for a border poll on Northern Ireland's status.

He said: "To have a border poll, and even though I was the one who put it into the Good Friday Agreement, to have it in circumstances where there is not sustainability and there is not workability of the whole institution would be the wrong time to do it.

"The only time a border poll is worth having, when a sizeable number, whatever it is, it will never be huge, but a sizeable number of unionists and loyalists believe that they can join and share with republicans and nationalists in a new Ireland."

The comments came as five former secretaries of state for Northern Ireland marked the 20th anniversary of the Good Friday Agreement by warning against a hard border.

In a joint letter to The Times, organised by the pro-Europe group Open Britain, Peter Mandelson, John Reid, Peter Hain, Paul Murphy and Shaun Woodward said: "We are concerned that the re-introduction of a hard border will lead to instability that could threaten the very existence of the agreement.

"Those who value the agreement and the peace it brought to Northern Ireland have a duty to speak up and make clear their opposition to the government's Brexit policy. They should insist that the option of continuing in the customs union and single market remains open."