The White House has said that the situation with North Korea was moving in the right direction after North Korean leader Kim Jong-un met with Chinese President Xi Jinping in Beijing.

"We're going to be cautiously optimistic but we feel like things are moving in the right direction and the meeting yesterday was a good indication that the maximum pressure campaign has been working," White House spokeswoman Sarah Huckabee Sanders told reporters.

Mr Kim pledged to denuclearise and meet US officials following his historic meeting with Mr Xi.

After two days of speculation, China and North Korea both confirmed that Mr Kim had visited Beijing and met Mr Xi during what China's Foreign Ministry called an unofficial visit from Sunday to today.

The China visit was Mr Kim's first known trip outside North Korea since he assumed power in 2011.

Some analysts believe it will serve as preparation for upcoming summits with South Korea and the US.

North Korea's KCNA news agency made no mention of Mr Kim's pledge to denuclearise, or his anticipated meeting with Mr Trump that is planned for some time in May.

China has traditionally been the closest ally of secretive North Korea, but ties have been frayed by Pyongyang's pursuit of nuclear weapons and China's backing of tough UN sanctions in response.

China's Foreign Ministry cited Mr Kim in a lengthy statement as telling Mr Xi that the situation on the Korean peninsula was starting to improve because North Korea had taken the initiative to ease tension and put forward proposals for peace talks.

"It is our consistent stand to be committed to denuclearisation on the peninsula, in accordance with the will of late President Kim Il-sung and late General Secretary Kim Jong-il," Mr Kim said, according to the statement.

North Korea is willing to talk with the United States and hold a summit between the two countries, he said.

Received message last night from XI JINPING of China that his meeting with KIM JONG UN went very well and that KIM looks forward to his meeting with me. In the meantime, and unfortunately, maximum sanctions and pressure must be maintained at all cost!

"The issue of denuclearisation of the Korean Peninsula can be resolved, if South Korea and the United States respond to our efforts with goodwill, create an atmosphere of peace and stability while taking progressive and synchronous measures for the realisation of peace," Mr Kim said.

Mr Kim predecessors, grandfather Kim Il-sung and father Kim Jong-il, both publicly promised not to pursue nuclear weapons but secretly continued to develop the programmes, culminating in the North's first nuclear test in 2006 under Kim Jong-il.

Many analysts and former negotiators believe this still constitutes North Korea's stance on denuclearisation of the Korean peninsula and remain deeply sceptical Mr Kim is willing to give up the nuclear weapons his family has been developing for decades. 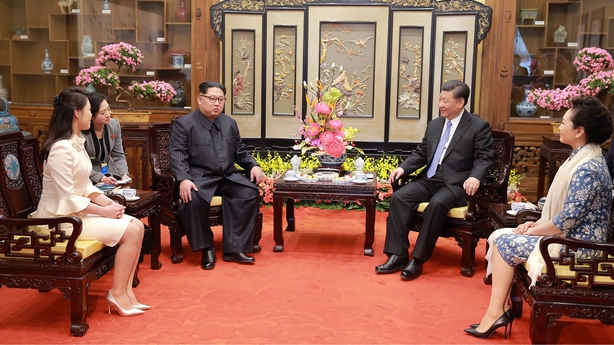 Billed as an unofficial trip, Mr Kim's appearance in Beijing contained almost all the trappings of a state visit, complete with an honour guard and banquet at Beijing's Great Hall of the People.

The two leaders also met at the Diaoyutai State Guest House, where Kim Il-sung planted a tree in 1959 that still stands.

State television showed pictures of the two men chatting amiably along with their wives Ri Sol Ju and Peng Liyuan.

China briefed Mr Trump on Mr Kim's visit and the communication included a personal message from Mr Xi to Mr Trump, the White House said in a statement.

"The United States remains in close contact with our allies South Korea and Japan. We see this development as further evidence that our campaign of maximum pressure is creating the appropriate atmosphere for dialogue with North Korea," it said.