The Government has welcomed Michel Barnier’s comments that any solution on the issue of the border "must be precise, clear and unambiguous".

Earlier today, the EU's chief Brexit negotiator said the UK's decision to leave the EU single market and customs union will mean checks at the Irish border are "unavoidable".

The focus of the latest round of Brexit talks in Brussels this week has been the transition phase.

Mr Barnier gave a news conference in Brussels outlining developments in the negotiations.

On the issue of the border, Mr Barnier told reporters: "Any solution must be precise, clear and unambiguous."

"It is important to tell the truth. A UK decision to leave the single market and to leave the customs union would make border checks unavoidable."

Mr Barnier said that three "substantial" disagreements remain with the UK over plans for a transition period after Brexit, adding: "If these disagreements persist the transition is not a given."

He said that Britain must accept all EU rules and obligations "until the end of the transition" in order to secure an agreement, adding: "Time is short and we haven't a moment to lose if we want to succeed."

This evening, a spokesman for the Taoiseach said: "We welcome the clear message today from Michel Barnier that time is running out and that we need to see greater clarity from the UK regarding the future relationship between the UK and the EU, and its detailed proposals to avoid a hard border."

The spokesman also said that "Mr Barnier has made clear that being outside the customs union and single market rules gives rise to the need for checks and controls".

In such a scenario, it is all the more important to have certainty about how the Irish border will be handled, to deliver on the UK's commitment in December to avoid a hard border as an over-arching requirement for any future arrangements, he said.

The spokesman also said: "Mr Barnier has made clear that the third option - maintaining regulatory alignment - must be spelt out in the Withdrawal Agreement as a reliable default option to apply, unless satisfactory alternative arrangements are agreed. The Government shares this view and welcomes the clarity of today's comments."

However, Britain’s Brexit Secretary David Davis has critised Mr Barnier’s comments saying there was a "fundamental contradiction" in the approach taken by Mr Barnier and the European Commission to the transition period. 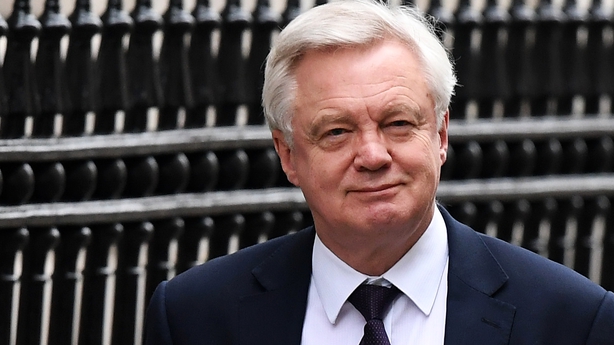 "Given the intense work that has taken place this week it is surprising to hear that Michel Barnier is unclear on the UK's position in relation to the implementation period," Mr Davis said.

Mr Davis acknowledged that "for any such period to work both sides will need a way to resolve disputes in the unlikely event that they occur".

"But there is a fundamental contradiction in the approach the Commission is taking. Today they acknowledged that a way to resolve disputes and infringements is needed.

"Yet at the same time they dismissed the UK's push for reasonable safeguards to ensure our interests are protected. It is not possible to have it both ways."

The draft proposal suggested that the EU could suspend benefits to the UK during the transition if Britain transgressed on any agreed rules.

Mr Davis made the comments after two days of talks amongst Theresa May's Brexit ministers that were aimed at reaching agreement on a future relationship with the EU.

Today, Mr Barnier said his attitude throughout the negotiations had "not been in the least discourteous or vindictive".

"We never wished to punish the UK - it's totally foreign to my state of mind, and this has been true from the very beginning and this will be true until the very end of the negotiations.

"Quite simply we have to construct a withdrawal agreement which is legally sound and does not give rise to any uncertainty in anyone's mind," said Mr Barnier.

Mr Barnier also said the proposal for the legal text, published this week by the European Commission, provided for "provision which reinforces implementation mechanisms that exist in the EU during the transition period".

Mr Barnier said: "To be frank, I am surprised by these disagreements. The positions of the EU are very logical, I think.

"The UK wants to enjoy the advantages of the single market, the customs union and common policies. It has therefore to accept all the rules and the obligations until the end of the transition. That's very logical.

"It also has to accept the ineluctable consequences of its decision to leave the EU, to leave its institutions and its policies."

He defended the controversial provision in the draft legal text on the transition deal, which Mr Davis branded "unwise" and not "in good faith".

He said: "I don't really understand why there was this reaction, this uproar.

"There is no wish whatsoever to punish. We are trying to draft an international agreement on a solid basis that can be effectively implemented."

Asked if there was a link between resolving the border question and agreement to a transitional period, Mr Barnier said: "These subjects have to be tackled and dealt with under the withdrawal agreement, that is the link.

"No transition will be possible if there is no withdrawal agreement."

The UK government has issued a technical note calling on the EU and more than 100 countries with which it has international deals to treat the UK as if it were a member state so signed agreements on the likes of trade, nuclear cooperation and aviation can continue to function during the transition.

Mr Barnier said: "I have read that and I think that confirms our legal assessment, our legal analysis when it comes to international agreements."

The withdrawal agreement "could come to an agreement on the obligations stemming from those" deals.

But "when it comes to the benefits of those agreements" the third countries would also have a say about whether they continue to apply to the UK".

The issue will be on the agenda of the next round of talks at the UK's request, he said.

Concern among businesses in border region

Reacting to the statement from Mr Barnier, business interests along the border have expressed their dismay at the prospect of border checks.

Paddy Malone of Dundalk Chamber of Commerce said border checks will bring a huge amount of paperwork and possible checkpoint delays on both sides of the border.

He described the idea as a nightmare that will set Dundalk and the region back 40 years.

Conor Patterson of Newry Chamber of Commerce and Trade said having a border on the island of Ireland is not viable because the border is porous and populations do not want it.

He warned people will be unlikely to comply with a hard border.

Mr Patterson said he believes there is a now real risk there will be checks at seaports and ports of entry into Britain, which would also be unwelcome.