The Supreme Court will make a formal declaration tomorrow that the absolute ban preventing asylum seekers working here is unconstitutional.

The court said in November that it would make the declaration on 9 February, regardless of what progress the State had made in addressing the court's findings.

The court ruled in May last year that the absolute ban was unconstitutional "in principle", but it deferred making a formal declaration for six months to allow the legislature to address the situation.

In November, the State asked for more time.

The court was told at that stage that the Government was in the process of opting into the EC Reception Directive, which contains a provision requiring member states to afford the right to work in certain circumstances.

However, lawyers for the State said the matter was complex, with many issues requiring to be addressed.

At the time, the Chief Justice, Mr Justice Frank Clarke, said the court had "exceptionally" not taken the normal course of immediately declaring the provisions to be unconstitutional.

He said the court recognised there were choices to be made as to how the difficulty identified was to be addressed.

But he said the balance of justice would be met by affording the State a relatively brief period to take whatever measures the State considered necessary.

However, he said the court's intention was to make a formal declaration on 9 February. 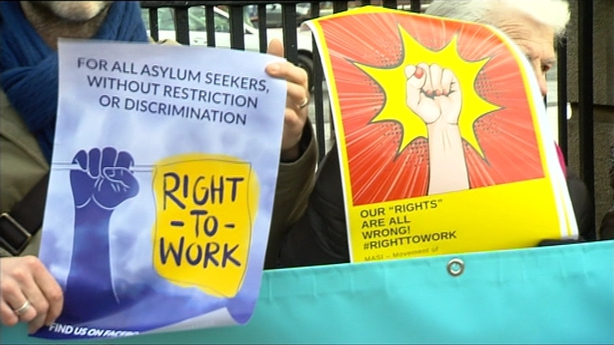 Protests were held today by migrant rights groups outside the Dáil and other locations, calling for an unrestricted right to work for asylum seekers.

The protests come as the Government moves to put restrictions in place ahead of the Supreme Court's formal declaration.

There has been criticism of the Government's proposals, which were announced last month by Minister for Justice Charlie Flanagan.

They include criteria stating that the job to be taken up must generally pay more than €30,000 per year and that it cannot be filled by an EU citizen, or a person with full migration permission in Ireland.

Asylum seekers would also be prohibited from working in 70 employment sectors, including catering and childcare.