Minister for Health Simon Harris has said he will keep "an open mind" in relation to asking the Health Information and Quality Authority to carry out an independent review into how the University Hospital Kerry scans issue was handled.

Mr Harris was speaking to RTÉ News at Temple Theatre in Dublin this morning, where the Department of Health published new figures showing record organ transplant and donor numbers this year.

It was revealed that the number of patients recalled as a result of the University Hospital Kerry scans review has now increased to 45.

According to the minister, 60% of patients have had their scans reviewed.

University Hospital Kerry reviewing over 46,000 scans
Consultant at centre of Kerry scan review was a locum

Minister Harris said once the reviews are completed, he would like to meet the South/South-West Hospital Group to see what lessons need to be learned. 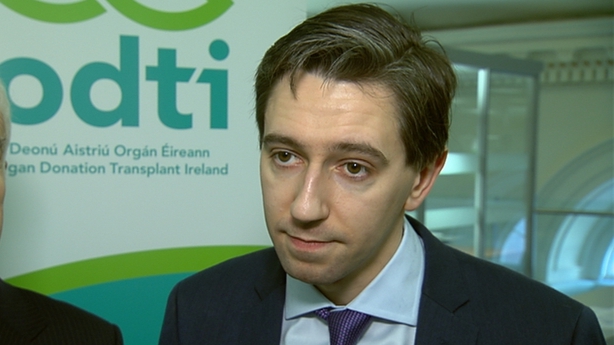 He said he would then decide what further action needs to be taken.

He said he expects the review to be completed in the next four to five weeks.

Mr Harris said the priority is to get the reviews completed as quickly as possible and provide reassurance to patients.

It has been confirmed that two of the patients require further clinical treatment.

The hospital said this is a precautionary measure but no further details have been given.

It said no further clinical follow up has been required for the other patients "in relation to their radiology investigations".

So far, seven patients have had a serious delayed diagnosis, of which at least three involve cancer.

In a statement, the South/South-West Hospital Group told RTÉ News that 26,625 of the 46,300 scans have now been reviewed.

The review relates to one locum consultant radiologist, who no longer works at the Kerry hospital.

It covers the period March 2016 to July 2017 and involves X-rays, ultrasound scans and CAT scans.

The Health Service Executive has reported the consultant to the Medical Council.

Concerns at the Kerry hospital emerged during the summer, when three serious reportable events were notified to hospital management.

The consultant also worked for a short period in 2006 as a locum at the Mater Hospital in Dublin, and the hospital is conducting an internal review.

However, the hospital says it is important to note that there are no concerns regarding the quality of the work of the radiologist for the brief period the doctor worked there.

Separately, Cork University Hospital says it has checked over 2,460 X-ray scans which had built up in a backlog since the summer, due to staffing shortage issues.

The check began on 29 November and was completed on 22 December.

Fourteen patients have been recalled there and all of the patients are expected to have their repeat scans completed by 23 January, subject to the availability of the patients.

The hospital has reported no cases of adverse outcomes to date.