Gardaí have arrested three people after a car they had been pursuing crashed into another vehicle on the N7 in Co Kildare this afternoon.

One person has been seriously injured and has been taken to Tallaght Hospital.

The Garda Síochána Ombudsman Commission (GSOC) has appealed for witnesses, in particular motorists with dashcam footage of events surrounding the crash.

Gardaí said they received a report of a burglary at a house in Athy at around 3pm. The intruders were disturbed and fled the scene in a waiting car when the occupants of the house returned home.

During a follow-up operation, members of a garda anti-burglary unit intercepted a car on the N7 Naas Road at about 3.45pm.

Gardaí signalled the car to stop, and, having initially stopped, the car sped off when approached by gardaí.

A short time later, the car was involved in a collision with another car. 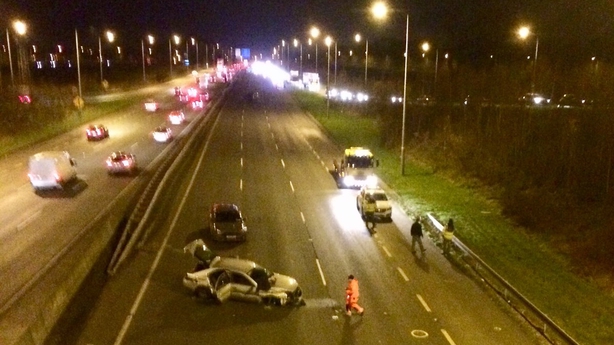 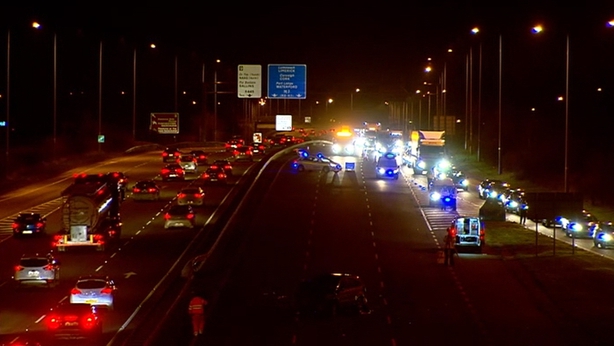 Three of the four people in the car gardaí were pursuing were arrested on suspicion of burglary.

They are three young men in their teens.

The fourth person, another young man, was seriously injured.

The sole occupant of the third car was taken to Naas Hospital and is being treated for minor injuries.

GSOC said that while the incident happened on the N7 northbound, motorists travelling in the opposite direction may also be able to assist them.

Gardaí say their investigation into the incident is ongoing.

The scene of the collision is being examined and traffic diversions remain in place.

The N7 has since fully reopened after the vehicles involved were taken away.