The Committee on the Eighth Amendment has launched its final report, recommending repeal of Article 40.3.3, which recognises the equal right to life of the mother and the unborn child.

The report says that the current Constitutional provision prohibiting the termination of pregnancy in Ireland is unfit for purpose and that constitutional reform is necessary.

Chairperson Senator Catherine Noone said the committee was never about reaching a consensus, as it is a divisive issue.

She told a packed news conference at Leinster House that the report reflected the fact that the views of the majority of the committee sit in the middle of polar views on abortion.

Senator Noone said it would take time for the public and politicians to consider and understand the recommendations in the report.

She said a referendum would give people their say. 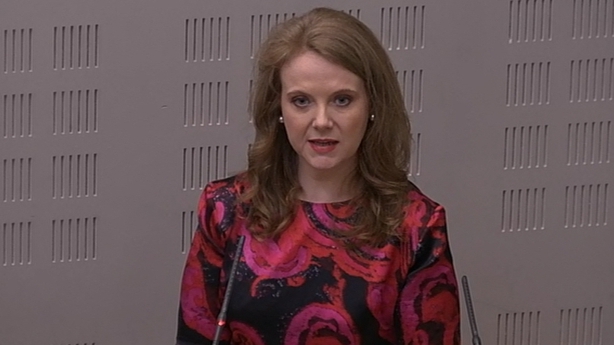 Independent Senator Lynn Ruane said many women would continue to travel for abortions in the future.

She said some women would not know they were pregnant until after 12 weeks and would be forced to travel.

Bríd Smith of People Before Profit said she did not believe women have bodily autonomy even following the publication of the committee’s report.

Ms Smith said whatever else happens, the Eighth Amendment had to go and she appealed to the public to focus on that.

Fine Gael's Bernard Durkin noted the illegal unsupervised use of abortion pills, which he said the termination up to 12 week proposal covers in the report.

He said the issue had generated an animated debate over past number of years and both sides of "opinion" need to be respected.

Fianna Fáil TD Lisa Chambers echoed calls for a calm reasoned debate. She said pitfalls have been seen over the past 30 years and lessons needed to be learned from that.

Sinn Féin said it will decide its position at its next Árd Fhéis. TD Louise O’Reilly noted the impediments highlighted by the Masters of the Maternity Hospitals placed on them under the Protection of Life During Pregnancy Act.

She said in her view the most compelling evidence was from doctors and medical evidence.

.@PFitzpatrickTD says he is very disappointed the Taoiseach @campaignforleo said he favoured holding a referendum on #8thAmendment before #8Commitee had completed its work @rtenews #dail pic.twitter.com/ZXU4I5QHmw

Three members of the committee have described the process as "unacceptably flawed", saying it had led to cruel and unjust recommendations in the final committee report.

They recommend that the Eighth Amendment be retained and the fundamental issue of human rights not be put to a vote.

They suggest that a Citizens' Assembly be convened to explore the means whereby positive alternatives to abortion can be explored so as to fully respect and defend the rights of unborn children, their mothers and fathers.

Their report also recommends that the provision of appropriate perinatal and palliative care be provided in a consistent, high-quality manner across the country and public attention be drawn to this.

It also states that under a retained Constitutional provision, attention should be paid to the provision of pregnancy counselling, in particular State-funded pregnancy counseling, so as to provide appropriate care to women in crisis pregnancy while seeking to prevent abortion by way of encouraging positive alternatives wherever possible.

Mr Mullen has said he believe thousands of lives have been saved under current Article 40.3.3 and that "positive alternatives" to abortion should be looked at.

Speakig on RTE's Drivetime, he described as "radical" the proposals contained in the final report.

He said he would target abortionists with the law, saying the law needs to be there as a deterrent.

Earlier, Mr Fitzpatrick expressed his disappointment over Taoiseach Leo Varadkar announcing a referendum on the issue before the committee had considered the recommendations of the Citizens’ Assembly.

However, he commended Senator Noone for her work as chairperson.

Mr McGrath said that "a huge gaping hole" during the hearings on was the lack of legal representation to defend the Constitution.

Speaking on RTÉ's News at One, he rejected the conclusions of the report to recommend repeal and to allow access to abortion up to 12 weeks.

He said it "behoves the government of the day" to defend the Constitution, but this did not take place, despite "several requests for legal representation from the Attorney General's office to defend the status quo".

It is three months to the day since the committee sat for the first time in public session to consider recommendations from the Citizens Assembly on Article 40.3.3.

Members considered the constitutional, legal and medical grounds for abortion in Ireland and today's report echoes the votes taken by TDs and Senators last week when the majority voted in favour of repealing the Eighth Amendment and to allow terminations up to 12 weeks of pregnancy.