Firefighters across Southern California have made progress in battling a slew of scattered wildfires that have killed at least one person, destroyed hundreds of buildings and forced more than 200,000 people from their homes this week.

As the dry Santa Ana winds that have fueled the blazes abated slightly, officials lifted evacuation orders for parts of Ventura and Santa Barbara counties, and crews started getting the upper hand in containing some major fires.

However with the National Weather Service expecting a pickup in top wind speeds of 89km/h from 64km/h, the 8,700 firefighters battling six fast-moving blazes were under pressure to work quickly.

"We’re far from being out of the woods on any of them," Ken Pimlott, director of the California Department of Forestry and Fire Protection (CAL FIRE), told a news briefing in Ventura.

This week's fires have destroyed nearly 800 buildings, mostly in Ventura County where the Thomas Fire, the largest blaze, erupted on Monday.

Officials said that by yesterday the Thomas Fire had charred 148,000 acres, an area about the size of Chicago. 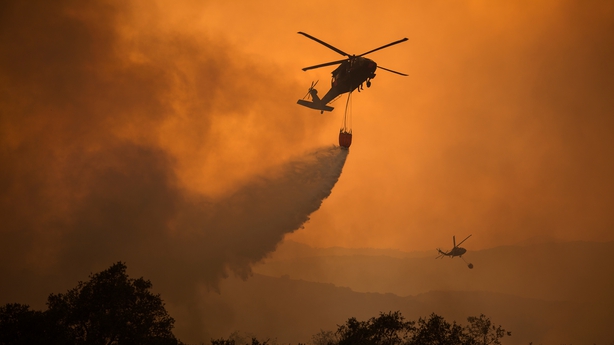 As evening approached, the blaze was most active north of the small city of Ojai, north of Ventura, known for its classical music festival and its spas.

David Clark, information officer for Cal Fire, said the city of Ojai itself was not threatened as of yesterday afternoon.

They "could happen every year or every few years," he said.

He added: "They're happening all the time - this one is just more intense. It has been a terrible tragedy for so many people."

The fires threatened Californians from Santa Barbara County down the Pacific Coast to Mexico.

They have killed at least one person, after a 70-year-old woman died along an evacuation route from the Thomas Fire.

The fires have threatened property worth billions of dollars, just weeks after October wildfires in northern California resulted in insured losses of more than $9 billion. At their peak, this week's fires drove about 212,000 Californians from their homes.

The lifting of several evacuation orders reduced the number of people displaced from their homes to 87,000 on Saturday.

Visibility improved in Ventura early on Saturday, with blue skies returning as strong winds blew smoke out to sea. Bits of debris flying around did not deter surfers from the beach nextto the Ventura Pier.

Throughout the area, officials reported gains in their battle to contain the fires.

Fallbrook, known for its avocado orchards, burned, and homes were destroyed in its Rancho Monserate Country Club retirement community.