The Central Bank has decided not to change the core elements of its mortgage rules after it conducted a review of the measures.

The regulator said the loan-to-income and loan-to-value limits will remain unchanged for next year.

However, minor amendments have been made to the mortgages that can be issued outside of the lending restrictions.

Currently, first-time buyers (FTBs) can borrow up to 90% of the value of a property, with a limit of 3.5 times their incomes.

Second and subsequent buyers (SSBs) can borrow up to 80% of the value of a property.

10% of the value of new lending to second & subsequent buyers will be allowed above the limit in 2018 pic.twitter.com/zZlFpU5NpE

From January, lending to SSBs outside of these limits will be reduced from 20% to 10%.

The equivalent rate for first-time buyers (FTBs) remains at 20%, but the changes for SSBs could potentially increase the available level of lending to FTBs outside of the limits.

20% of the value of new lending to first time buyers will be allowed above the LTI limit in 2018. pic.twitter.com/WPNKCXuUi8

The Central Bank also said that lending will continue to be limited to 3.5 times of a mortgage seeker's income, saying this "anchor" was an "essential constraint on excessively risky lending".

The bank said the mortgage measures are now firmly established as a permanent feature of the Irish mortgage market to increase bank and borrower resilience and ensure the system can better withstand future economic shocks. 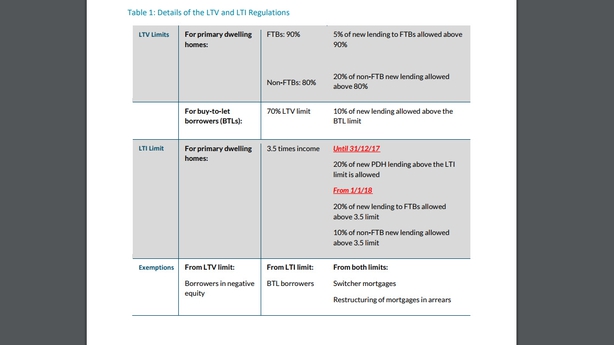 "In accordance with our mandate, the Central Bank is committed to ensuring that the role played by mortgage credit in the wider housing market remains sustainable," the bank said in a statement.

"The measures are not designed to target a specific level of, or growth in, house prices," it added.

But he said it remains important to mitigate the risks for households and banks in the event of a future decline in house prices.

Professor Lane said the Central Bank would continue to monitor developments through its annual cycle of reviews.

"We stand ready to adjust these borrower-based measures and/or other macro-prudential policy tools as may be appropriate to safeguard the long-term sustainability of Irish mortgage lending and the stability of the wider financial system," he added.

Separately, figures from the Banking & Payments Federation show mortgage approvals rose by 19.9% in the year to October.

3,751 approvals valued at €834m were recorded during the month, of which just over half were for first-time buyers.