The jury at the inquest into the deaths of five people who were in a car that slid off the slipway at Buncrana pier in March 2016, has found they died by misadventure.

The cause of death for all victims was drowning.

Those who died were Sean McGrotty, 49, his sons Mark, 12, and Evan, eight, his partner's mother Ruth Daniels, 59, and her daughter Jodie Lee Daniels, who was 14.

The jury spent an hour and 20 minutes deliberating in relation to the case of Mr McGrotty. 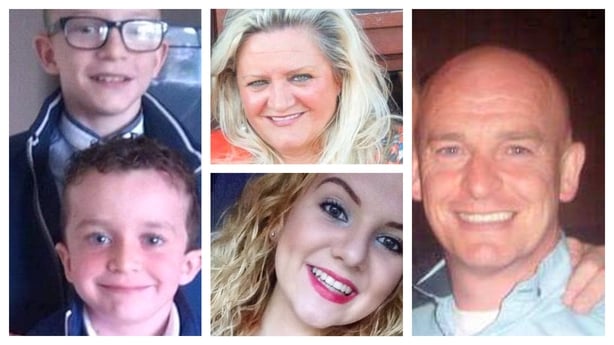 A solicitor representing Louise James read a statement on her behalf following the conclusion of the inquest into the deaths of five members of her family.

Robert Anderson of Anderson and Gallagher Solicitors in Dublin said that Ms James was highly distressed at hearing the evidence and that she is an incredibly brave and courageous lady.

In the statement, Ms James said: "It is with a heavy heart and great sadness that I have listened to the evidence that has emerged during the course of this inquest.

"There are simply no words capable of expressing my pain, my disbelief, and indeed my anger at what happened on that fateful day."

"My heart is shattered. Every moment of every day is filled with thoughts of my beautiful boys Mark and Evan, my mother Ruth, my sister Jodie Lee and my partner Sean."

"The one ray of sunshine in my life is my beautiful daughter Rioghnach who survived this horrible tragedy...

"I firmly believe that the slipway should have been closed to the general public or else proper warning signs displayed as it was an accident waiting to happen.

"Finally regarding Sean, notwithstanding the evidence that has emerged I wish to add that he was a wonderful partner to me and an adoring father to his children, he lived for them and it is clear from what this inquest has heard that he died as he lived in that he could have saved himself but chose not to."

RNLI member Gregory McDaid described to the inquest how he and others tried to resuscitate Evan McGrotty after he recovered his body from the water.

Mr McDaid said that he carried out chest compressions on the young boy, but at no time did he see any signs of life.

Another RNLI member carried out mouth-to-mouth resuscitation and they decided to continue working on the little boy until other emergency personnel arrived.

Fire service personnel then connected a defibrillator and oxygen but the boy was pronounced dead.

She said she was told that Evan had a history of muscular dystrophy but she would not have known that, he was just like any other little boy, she said.

The jury recommended that Irish Water Safety take a prominent role with other agencies in implementing best practice in relation to safety at piers and slipways.

They said they hope this can be implemented as quickly as possible so that such a tragedy does not happen again.

The jury offered their condolences on what they described as a heartbreaking tragedy.

Earlier, an RNLI volunteer who dived down to the car in which the five people drowned said that he was unable to open any of the doors on the driver's or passenger sides of the vehicle.

John O'Raw was speaking on the second day of the inquest into the deaths after the car driven by Mr McGrotty slid off the slipway at Buncrana pier.

Rioghnach-Ann McGrotty, the four-month-old daughter of Mr McGrotty and his partner was rescued from the car, an Audi Q7, by Donegal man Davitt Walsh.

Mr O'Raw said that he tried the handles of the doors and they gave freely but the doors would not open.

He said the window of the driver's door was broken and he could reach inside, he could see that there was no-one in the front two seats but could not see into the rest of the car.

Mr O'Raw said that the car was about 20 metres out from the slipway in a depth of about three metres of water, the tailgate was open and it was resting flat on level sand.

He said the driver's door window was cracked but intact and looked like a bowl pushed inwards. All the other windows were closed and intact.

Solicitors for the McGrotty family and for Ms James thanked Mr O'Raw and his colleagues in the RNLI for all the work they did on the evening of the tragedy.

Mr O'Raw told the inquest that seven minutes after the volunteers had received the call-out, they had recovered the first body, that of Ms Daniels.

Garda Seamus Callaghan told the inquest that when he arrived at the slipway RNLI members were performing CPR on Ms Daniels. The four other bodies were taken from the water over a relatively quick period of time.

He said all five people were pronounced dead at the scene and prayers said over their bodies individually.

The car was towed from the water by the Fire Brigade and a baby's bag found in it helped to identify those who had died.

There was purse in it with cards in the name of Ms Daniels and a medicine bottle with the name of baby Rioghnach-Ann McGrotty.

Public Service Vehicle Inspector, Garda Damien Mulkearns examined the Audi Q7 the day after the tragedy and said he found it to be roadworthy, there were no mechanical issues, the front tyres were in fair condition and the rear tyres in good condition.

CEO of Irish Water Safety John Leech gave advice at the inquest on what to do if your car goes into water.

Mr Leech said that you should not panic, you should not touch your mobile phone and should then follow four steps - take off, or cut off, your seatbelts; open or break the windows; undo the restraints on children from oldest to youngest and then get out through the windows, children first.

Mr Leech said that when cars go to the bottom, the doors will open but more slowly. Electric windows he said are unpredictable but you should get the windows opened within a minute.

Mr Leech said the car might float for a while but the phone is the last thing you should touch - the important thing is to get out as fast as possible and then make the emergency call.

Mr Leech showed the inquest a small device which can be used to break a car window and also cut a seatbelt.

He said it can be used by children and only costs about €10 and he believes it should be in cars when they are sold.

Head of Technical for Audi Ireland Ger Boyle told the inquest that the driver of a car on a slippery surface, like the algae on the slipway at Buncrana, would have had no control over the vehicle.

He also said that had Mr O'Raw been able to put his hand in through the broken window, he should have been able to open the driver's door from inside.

Mr O'Raw told the inquest that he had not done that for safety reasons.

Other witnesses said there was no difficulty opening the doors of the car after it had been taken out of the water.