North Korea has warned that the deployment of three US aircraft carriers in joint navy drills with South Korea is fuelling tensions that could lead to nuclear war.

North Korea's UN Ambassador Ja Song Nam said in a letter to UN Secretary-General António Guterres that this was "the worst ever situation prevailing in and around the Korean peninsula".

The first such deployment of three US carriers since 2007 "is making it impossible to predict when nuclear war breaks out due to the US nuclear war equipment" taking up a "strike posture," wrote the ambassador. 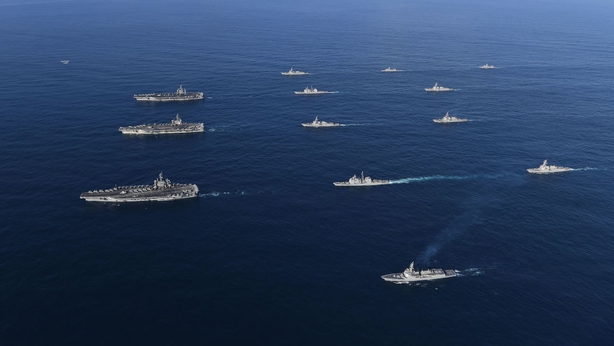 The ambassador said the United States had reactivated round-the-clock sorties by B-52 strategic bombers and was making frequent flights of B-1B and B-2 bombers in the air space of South Korea.

"The large scale nuclear war exercises and blackmails... make one conclude that the option we have taken was the right one and we should go along the way to the last," wrote Mr Ja.

North Korea conducted its sixth nuclear test this year and test-fired a series of advanced missiles, including intercontinental ballistic missiles.

In response, the United States led a push at the Security Council to impose tougher sanctions, such as export bans, to deny Pyongyang of hard currency revenue to build up its military programmes.

The North Korean ambassador accused the council of "turning a blind eye to the nuclear war exercises of the United States who is hell bent on bringing a catastrophic disaster to humanity."

The exercises come on the heels of President Donald Trump's visits to Tokyo, Seoul and Beijing this week, which were dominated by the question of how to counter Pyongyang's nuclear weapons threat.