The Citizens’ Assembly has heard that there is a strong case for farmers to have to pay a cost for the greenhouse gasses for their activities produce.

The assembly has been discussing the effects of climate change on transport and agriculture.

The assembly met in Malahide, Co Dublin, where it began its second weekend of debate and consideration about how the State can make Ireland a leader in tackling climate change.

Professor Alan Matthews of Trinity College Dublin told the assembly that farming in Ireland would not represent sustainable production if citizens had to purchase carbon credits to meet EU emissions targets, while agriculture production was provided with privileged protection.

The chair of the Citizens Assembly, Ms Justice Mary Laffoy, said the task of agreeing recommendations to put to the Oireachtas about climate action was not an easy task.

Earlier, she said she expects vigorous debate and discussion before the members vote by secret ballot tomorrow afternoon on the climate action recommendations to be submitted to the houses of the Oireachtas.

Ms Justice Laffoy emphasised that the task of offering a citizen's insight to the Oireachtas and the Government on measures that would likely have the support of the public was not as easy as it sounds.

She also said that the 1,200 submissions from the public on climate change received by the assembly clearly demonstrated a prevalence of the issue on the minds of the public, and a strong desire for action.

Presentations were delivered at the assembly about the efforts that other countries - including Denmark and Scotland - are making, and the climate leadership that they are showing.

The chief executive of the National Transport Authority, Anne Graham, explained to the assembly how climate change considerations are now being built into transportation policy.

She said private cars account for 75% of trips in Ireland, and that ways have to be found to encourage people to use their cars less, and switch instead to sustainable transport. 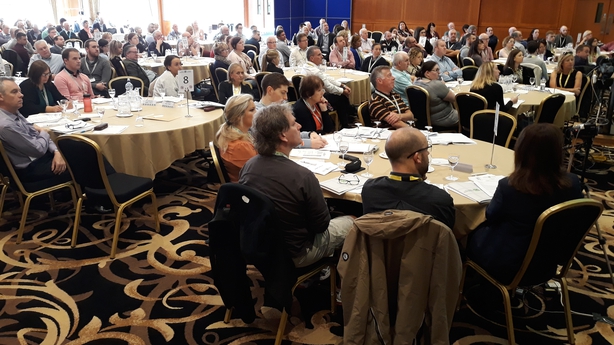 Dr Brian Caulfield, an associate professor at Trinity College Dublin, told the assembly that the modes of transport that will be taken into the future will be predominantly public transport, walking, and cycling, and where applicable, a low emissions vehicle.

He said that there is a lot of change required, and those changes were not going to be easy, and would be expensive.

The assembly's considerations into climate change come as a new report examining the issue in the US has highlighted that it is driven by human activity.

It is five weeks since the assembly's first weekend gathering to consider what the State needs to do to make Ireland a leader in climate change.

At its last meeting, members were given key facts about the impact of climate change, national and international efforts to address it, and the energy sector.

They also heard examples of how Irish individuals, communities and organisations are showing leadership in this area.