The country is braced for gusts reaching 130km/h as Storm Brian descends on Ireland, less than a week after ex-hurricane Ophelia caused death and devastation.

A Status Orange wind warning is in place or a number of Atlantic coastal counties until 10pm tomorrow evening.

Winds of up to 80km/h and gusts reaching 130km/h are expected in Wexford, Waterford, Cork, Kerry, Clare, Galway and Mayo.

A Status Yellow wind warning is in place for the rest of the country, with average speeds of 65km/h and gusts reaching 110km/h expected.

A separate status yellow rainfall warning is in place for Atlantic coastal counties today, with accumulations of up to 50mm possible.

Speaking on RTÉ's Today with Seán O'Rourke, Met Éireann's Gerry Murphy said Storm Brian would bring gusts of up to 130 km/h over the southwest, particularly over west Kerry and Cork, overnight and tomorrow.

Mr Murphy said Storm Brian would be a typical Atlantic storm and very different from Storm Ophelia, which was an ex-hurricane.

He said the winds due to be generated this evening, hitting the south of the country, "won't be anywhere near as strong as Storm Ophelia".

One concern is there may be trees weakened by Ophelia that will be knocked over by the strong winds.

Sporting fixtures are likely to be affected in some areas. In Co Donegal, tonight's Airtricity Premier Division match between Finn Harps and Drogheda United was postponed due to heavy rainfall.

In racing, tomorrow's Fairyhouse meeting is under threat. A course inspection will be held at 8am in the morning.

Management at the Cliffs of Moher Visitor Centre in Clare announced that the tourist attraction will be closed to the public tomorrow due to high winds.

A number other tourist attractions and public amenities will also be closed tomorrow, including Dromore Woods Reserve in Co Clare, Coole Park at Gort in Co Galway and Fota Wildlife Park in Co Cork.

Meanwhile, efforts are continuing to control water levels on the River Shannon as levels rise following Ophelia and a deluge that hit the region yesterday.

There has been extensive localised flooding on many tributaries of the Shannon, with the River Brosna bursting its banks in a shopping centre carpark in Mullingar. No homes have been flooded.

Waterways Ireland staff are monitoring levels on the river between the Erne system and Limerick.

Most weirs and gates are now open to full capacity and the ESB confirmed that it will consider discharging up to 100 cubic metres of water from the system through Parteen Weir at Ardnacrusha if water levels continue to rise after the weekend.

This level of discharge would not any impact on flooding downstream.

The River Shannon water level in Athlone is more than 1.5m higher than it was this time two years ago, in advance of the biggest flood ever to hit the town at that stage.

However, the water levels at present remain 1.8m below the record flood levels in Athlone, measured on 5 January 2016.

Previous flood history in Athlone has shown that it often the late autumn that is key to ensuring the town avoids flooding. 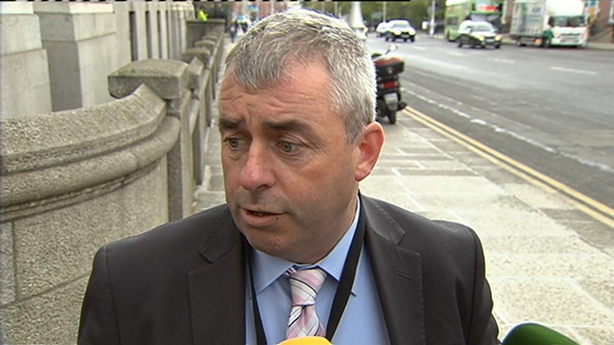 The Minister of State at the OPW Kevin 'Boxer' Moran (above) said that while River Shannon levels are "extremely high" at the moment, he does not foresee any flooding in the Midlands in the next 48 hours.

Mr Moran insisted the ESB, local authorities and all other stakeholders with an interest in the Shannon have been working together to reduce the possibility of flooding

High tide, which has been feared to bring flooding to both Cork city and some county towns, has passed this evening without any significant flooding.

However, motorists have still been warned that some local roads, particularly along the coast in Cork, are flooded.