Former US president Bill Clinton has met Northern Ireland's political leaders during a visit to Belfast.

The private discussions came as the two parties remain at loggerheads in negotiations to restore powersharing in Northern Ireland.

The DUP stressed that the behind-closed-doors engagement with Mrs Foster at the Culloden Hotel on the outskirts of Belfast did not focus on the ongoing impasse.

However, Sinn Féin said the situation at Stormont was on the agenda in its talks with the former president.

It is understood Mr Clinton is reluctant to be seen as directly intervening in the process.

Earlier, Mr Clinton was conferred with an honorary doctorate at Dublin City University for his contribution to peace and reconciliation on the island of Ireland.

Sr Stanislaus Kennedy and the founder of Glen Diplex, Martin Naughton, were also honoured at this morning's ceremony.

During Mr Clinton's eight years in the White House up to 2001, the IRA declared a ceasefire and the Good Friday Agreement was signed in Belfast.

Mr Clinton warned that the Brexit vote was about people thinking differences are more important than what they have in common and also suggested that some people who backed the split from the EU last year were not fully aware of what they had supported.

Speaking after his conferral, Mr Clinton said he used the example of the Good Friday Agreement shamelessly around the world and warned about inequalities and divisions spreading around the world.

"Now there are lots of people who think they are less human," he said.

"Now given the economic inequalities and the rapid pace of social change and all the upheaval that's going on ... people are reassessing whether what we have in common is more important than our differences.

"A lot of people begged to differ. That's really what the Brexit vote is all about." 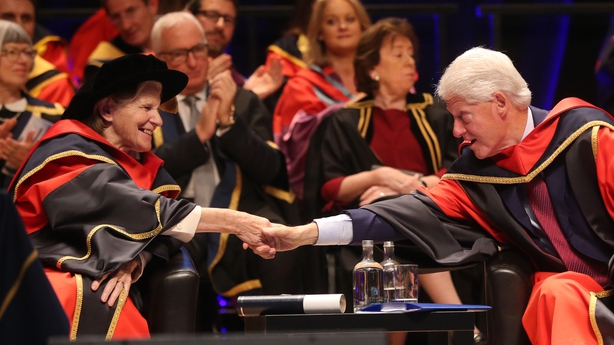 The former US president shared the stage with Sr Stan, who has challenged social inequality, particularly the area of homelessness, throughout her life.

Mr Naughton and his wife Carmel have a track record of donating to good causes, as well as building one of the world's largest manufacturing companies.

Mr Clinton then flew to Belfast for a number of engagements.

After his meeting with Mrs Foster, he made a more public announcement about a new educational initiative in her home constituency of Fermanagh.

An academic link-up with universities on both sides of the Atlantic will see the re-generation of a peace building centre already named in Mr Clinton's honour in Enniskillen.

At the start of his comments, the former president told the DUP leader he did not like describing her as "former" first minister and expressed hope the institutions would be back up and running soon.

"We are going to get this going again I think," he said.

After meeting Mr Clinton elsewhere in Belfast, Mrs O'Neill: "We had a wide ranging discussion on a number of issues, including the current difficulties facing the political process, efforts to restore the political institutions on the basis of rights and equality and the implications of Brexit."

Dublin City University, Ulster University and University of Massachusetts (UMass) have come together in a joint initiative to regenerate the Clinton Centre.

The building is built on the site of the IRA's notorious 1987 Remembrance Day bombing.

A permanent memorial to the 12 victims of the attack will be incorporated into the new-look centre.

"I think it is altogether fitting that there is going to be a monument to what happened at Enniskillen," said Mr Clinton.

"I think it is also important that this small community where a very big bad thing happened will able to launch good things for the future and I am thrilled."

"It is a sad reality that Enniskillen is known to many across the world as a result of the 1987 bomb in the town," she said.

"I have worked with many of the survivors of that bomb. A permanent memorial for the victims being incorporated into the remodelled Clinton Centre will be a fitting tribute to those who lost their lives and those who still live with the scars."

Mr Clinton was due to fly to Northern Ireland yesterday but the trip was postponed due to Storm Ophelia.

Since his first visit to Northern Ireland in 1995 Mr Clinton has been the most high-profile international champion of the peace process.

During his most recent visit earlier this year for the funeral of Martin McGuinness, he urged party leaders to complete the work of the former IRA commander turned politician, and to restore power-sharing.